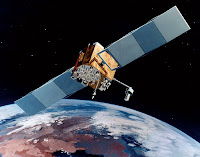 The United Kingdom and Ireland do not require a court order before agents of the state attach a GPS monitor to anyone’s vehicle. That stance is at odds with the US Supreme Court decision in United States v Jones (January 23, 2012), about which I posted yesterday. In today's post, I will develop the comparison among these jurisdictions, as well as jurisprudence of the European Court of Human Rights.
GPS refers to global positioning surveillance, which uses satellite technology to facilitate the remote monitoring or tracking of persons at a particular moment or over a period of time. (credit for US Air Force image of global positioning satellite)
► In the United Kingdom, GPS is not regarded as “intrusive” surveillance (which must be authorized by the Secretary of State or any senior authorizing officer, and, except in urgent cases, must be approved by a Surveillance Commissioner, that is, a High Court judge). The relevant provision in the Regulation of Investigatory Powers Act 2000 states explicitly that surveillance is not intrusive if carried out by a device which provides information about a vehicle’s location.
► Similarly, the explanatory memo to the Ireland's Criminal Justice (Surveillance) Act 2009 claims that such tracking is “a less intrusive form of surveillance”.
► Indeed, the one case in which the European Court of Human Rights has considered GPS, Uzun v Germany (2010), reiterated this view, stating at paragraph 52 that

'GPS surveillance is by its very nature to be distinguished from other methods of visual or acoustical surveillance which are, as a rule, more susceptible of interfering with a person’s right to respect for private life, because they disclose more information on a person’s conduct, opinions or feelings.'

This is debatable. As Maryland Law Professor Renée Hutchins (left) noted in a 2007 article, GPS can generate vast quantities of detailed and precise information about a targeted subject for an extended time frame.
In the UK, pursuant to Section 43 of the Regulation of Investigatory Powers Act, GPS need not be approved by a Surveillance Commissioner, and the authorizing officer is a senior police officer, or senior officer in an entity like the Serious Organised Crime Agency. Tracking may last for three months, after which an application for renewal of authorization may be made.
In Ireland, pursuant to Section 8 of the Criminal Justice (Surveillance) Act, a member of the Garda Síochána (the police force), of the Defence Forces, or of the Revenue Commissioners may monitor the movements of persons, vehicles or things, using a tracking device, for no more than four months – if this has been approved by a superior officer on the usual grounds of necessity and proportionality. Such an approval includes the placing and removing of the device. Thus, no judicial approval or warrant is required in either the UK or Ireland, in contrast to the use of other types of surveillance.
The absence of judicial oversight does not contravene Article 8 of the European Convention, as is evident from Uzun v Germany. In that case the applicant was suspected of being involved in several cases of attempted murder linked to a terrorist organization. Uzun was subject to GPS tracking of a car belonging to S, a presumed accomplice of his. At paragraphs 70 to 72, the Court found the GPS tracking to be in accordance with law, on the basis that such surveillance could only be ordered against a person suspected of a criminal offence of considerable gravity or, in very limited circumstances, against a third person suspected of being in contact with the accused. Although the prosecution could order a suspect’s surveillance via GPS, and judicial approval was not required, the Court felt that an important safeguard exists by mean of the ability of the criminal courts to exclude unlawfully obtained surveillance evidence and thereby discourage the investigating authorities from collecting evidence by unlawful means.
Though the Court welcomed the subsequent legal amendment to German law that now requires judicial review after one month of GPS tracking, its absence from the scheme applicable to Uzun, and its continued omission from the decision to initiate tracking, was not seen as problematic in terms of Article 8 of the European Convention on Human Rights, which guarantees respect for his private and family life. This interpretation of the exclusionary rule, and the benign view of state power and surveillance, fail to engage with the safeguard that would be provided by judicial oversight of the initial invasion into a person’s life by means of GPS.
Reliance on the decision of a senior police officer (or a prosecutor as in Uzun) is dubious given the incursion on a person’s private life. Nevertheless, the Court in Uzun concluded at paragraph 80 that the surveillance was necessary and proportionate on the grounds that he was subject to GPS for a ‘relatively short period of time (some three months)’, that GPS affected him only when travelling in S’s car and so he was not subject to ‘total and comprehensive surveillance’, and the very serious nature of the suspected offences.
A few observations on this reasoning:
► In the first instance, the view that police monitoring of one’s behavior for three months is a short period of time is debatable, and indeed the time frame in Jones amounted to 28 days. Nonetheless, this indicates that the time frames in the UK and Ireland are ECHR-compliant.
► Secondly, while it is true that the tracking of Uzun related to his time in his friend’s car only, the device could easily have been used more broadly.
As Justice Sonia Sotomayor (below right) (photo credit) noted last month in her separate concurrence in Jones, 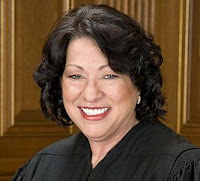 'GPS monitoring generates a precise, comprehensive record of a person’s public movements that reflects a wealth of detail about her familial, political, professional, religious, and sexual associations….The Government can store such records and efficiently mine them for information years into the future…. And because GPS monitoring is cheap in comparison to conventional surveillance techniques and, by design, proceeds surreptitiously, it evades the ordinary checks that constrain abusive law enforcement practices.'

The range and depth of this sensitive material, and the potential for misuse, call attention to the need for judicial involvement at the initiation of GPS monitoring.
As Professor Hutchins emphasizes at page 463 of her 2007 article, obtaining a warrant for GPS would not be unduly onerous for law enforcement and would ensure a more cautious use of this surveillance, which undoubtedly is intrusive by nature, if not by name.

(Cross-posted at Human Rights in Ireland blog)
by Liz Campbell at 6:00 AM