How the Cold War matters to war powers debate

(This is the second in a series of posts; the first post, published yesterday, is here.)

Helpfully generating an on-line discussion of my new book, War·Time: An Idea, Its History, Its Consequences, University of Chicago Law Professor Eric Posner dismissed an argument about Cold War statebuilding, writing that "it would be hard to exaggerate legal scholars’ obsession with the rise of executive power, going back at least to the Nixon administration, indeed to the New Deal."
The question of why the Cold War matters to an understanding of the war powers debate might, at first glance, seem obvious.
The most iconic U.S. Supreme Court case about the presidential war power, Youngstown Sheet & Tube v. Sawyer (1952), known as the Steel Seizure Case, is a product of the Cold War era, decided during the Korean War. We might also think of the Cold War as one “wartime” among many in American history, so that we might compare this wartime to others when analyzing the role of the courts in reining in executive power. It’s especially when this sort of argument is employed that the Cold War presents some difficulty. The Cold War is ambiguous, on its own terms. Was it really a “wartime” that we can compare with others, or was it something else?
The problem of just what the Cold War was was anticipated by George Orwell in 1945. When reflecting on what the advent of nuclear weapons would bring, Orwell suggested that the world would be divided between two or three “monstrous super-states,” each with nuclear weapons, that would “divid[e] the world between them.” These monster states would not use the bomb against each other. Instead, they would be “unconquerable and in a permanent state of ‘cold war’” with their neighbors. The nuclear age would therefore bring “an end to large-scale wars at the cost of prolonging indefinitely ‘a peace that is no peace.’” The idea that the Cold War was neither wartime nor peacetime ultimately competed with a discourse of the end of peace itself – the idea that wartime had become a permanent feature of the world.
The nature of the Cold War was troublesome at its ending as well as its onset. When an American soldier thought of as “the last Cold War casualty” was laid to rest on March 30, 1985, in Arlington National Cemetery, a controversy

erupted about how he should be remembered. Arthur Nicholson’s headstone reads: “Killed in East Germany, U.S. Military Liaison Mission.” The Veterans of Foreign Wars objected. “No mention is made of who killed him or why he was shot,” argued an editorial in the VFW Magazine. “This is reflective of how many Americans who preceded Nicholson in death during the Cold War are remembered.” American veterans have lobbied for the creation of a Cold War medal, so that the Cold War would be memorialized as a wartime, but the bill has not been enacted. (credit for photo of Nicholson)
Arthur Nicholson’s body came to rest in a shifting terrain. Even as he bled to death in a field in East Germany, the historical category of his military service—the Cold War—was beginning to collapse. The nature of this death and its consequences (was it a murder, as Vice President George Bush claimed? or was he a soldier killed in battle?) depended on whether it fit into a period that we call wartime. He was a liminal figure in an ambiguous era, and his death seemed to trigger a need to stabilize the categories.
The ambiguities of the Cold War era, so much a part of its experience, get lost when it is simply assumed to be a “wartime” in a way that allows for a comparison with other American wartimes.
The argument that wartime affects law and politics is an argument that a geopolitical event affects law and politics. To better understand the nature of the geopolitical event, we might then turn to the scholarship about geopolitics, for example scholarship in the history of U.S. international relations. But when we do, any easy analogy begins to fall apart, for we find a disconnect between the diplomatic history literature and legal scholarship about nature of the Cold War and its impact.
There are at least two sorts of difficulties presented by the disconnect between diplomatic history accounts of the Cold War and the way the Cold War tends to work as a category for legal scholars.
There is a problem of periodization, which brings with it a problem of causality. And there is the question of the focus of our analysis, or of what is at the heart of the story. The periodization/causation problem appears especially in the civil liberties literature, a topic I will take up later, but the starting point is simply that the Cold War in the civil liberties literature is different than the Cold War in the diplomatic history literature, and this tends to obscure our attention to other sources of causation, particularly the way the Red Scare informed domestic politics and culture, and the degree to which the Red Scare took on a life of its own. (Wyoming Law Professor Stephen M. Feldman has a helpful discussion of this in his book Free Expression and Democracy in America (2008), and work on U.S. Cold War history lays out the way security became a feature of the domestic political scene in a way that was not driven by security needs themselves.)
In the area of war powers, it is more of a problem of getting distracted. Youngstown is the focus discussion of the Constitution and the war powers during the Korean War. This focuses legal scholars on one arena of conflict over presidential power— the courts—when the real story of the growth of the state and of executive power lies elsewhere. Tulane Law Professor Stephen Griffin makes a parallel argument that Cold War diplomatic history tends not to be drawn on in war powers analysis, but he argues that it is essential.
Even as the Steel Seizure Case was unfolding, a more important Cold War-related shift in favor of executive branch power was underway. Explain Aberystwyth International Politics Professor Campbell Craig and Cornell historian Fredrik Logevall:

'America’s Cold War changed shape after 1950. It became a global campaign, much more ideologically charged, far more expensive—the military budget shot up from $14 billion in 1949 to $53 billion in 1953—and a substantially greater factor in the lives of ordinary Americans.' 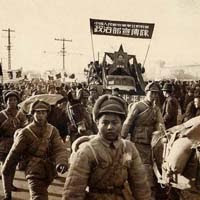 An engine of this change was a new and more alarmist conception of national security. In the aftermath of a successful Soviet test of a nuclear weapon and of the “fall” of China in 1949, U.S. President Harry S. Truman asked the Departments of State and Defense for an assessment of American national security policy. (credit for photo captioned "Communists entering Beijing in 1949")
The result was NSC-68 (top left). (image credit) This report on United States Objectives and Programs for National Security was a document that, as the international relations scholar Andrew Bacevich notes, would be seen

'as one of the foundational documents of postwar American statecraft.'

In alarmist tones, the report argued that the world was at a crisis point. “The Soviet Union, unlike previous aspirants to hegemony, is animated by a new fanatic faith, antithetical to our own, and seeks to impose its absolute authority over the rest of the world.” In a world dominated by two superpowers, the United States needed to respond to this threat by asserting world leadership to combat communism anywhere in the world. This required an ambitious program of building American military capacity. President Truman initially resisted, hoping to keep the federal budget in check, but reversed course with the war in Korea.
This highly ideological cast on the Cold War set the nation on a course of massive military build-up, committing the nation to worldwide military engagement. These developments resulted in part from the nature of a bipolar world in which the superpowers gained strength not from alliances but from building up their own capacities. But the full extent of American reaction wasn’t explained by security needs, Craig and Logevall suggest. Truman went further than he needed to in greatly expanding the military budget, in American actions in Korea, and in political repression at home.
Along the way, “Just as the New Deal created an array of institutions and interests that saw their prosperity and even their existence tied to the ever-growing expansion of the American state, the Cold War did the same thing after 1950 in the arena of foreign policy, though on a greater scale.” Ultimately, “a permanent defense establishment was coming into being.” What resulted was not only the expansion of the state, but the Cold War national security environment shifted power in the direction of the president.
If we try to fit the Cold War into the model of traditional wartimes, we don’t see the crucial and continuing way a state structure developed. Executive power did not rise and fall due to a wartime, but was restructured as a national security establishment solidified the president’s hold on the machinery of American warmaking. Many persist in calling the structure of American government in the late twentieth and early twenty-first centuries the “New Deal state,” reinforcing the idea that the changes in the structure of government that matter most stemmed from the 1930s. But a national security state was built on the New Deal foundation, and as global Cold War commitments drained more and more of the nation’s resources, the national security state would be the most important threat to the survival of what remained of the New Deal in the twenty-first century.
There is more to say about this, of course. My War Time book is only a start, and simply argues that when we take the Cold War itself into account, treating it as similar to other American “wartimes” does not work. If nothing else, I hope it will lead legal scholars to turn to the diplomatic history literature to understand the nature of this geopolitical era, instead of citing each other. A fuller account from me of the impact of Cold War statebuilding on American law and politics will have to await the next book.

(Cross-posted at War Time and Balkinization blogs)
by Mary Dudziak at 4:44 PM