Humanitarian Law in Action within Africa 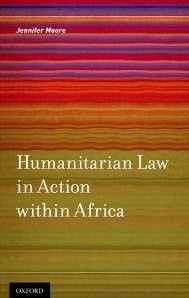 I’m happy to share news of my book Humanitarian Law in Action within Africa, soon to be released by Oxford University Press.
The book is the culmination of a four-year project that started with a panel presentation on the relationship between criminal justice and restorative justice in countries coming out of armed conflict. Slowly a book evolved. It explores the interrelationships between humanitarian law, human rights, international criminal law, and refugee law, as rules and tools for conflict resolution and social reconstruction.
The book compares the experiences of people in Uganda, Sierra Leone, and Burundi in the ongoing work of transitional justice in each of their countries.
My book has two parts:
► Part 1 is more “legal” – with individual chapters devoted to international law, and its four sister sub-fields. This part is designed to be a bit of a primer for academics who might specialize in one but not all of the various disciplines, and for practitioners who know the law in application but might want more of a conceptual framework.
Part I is global in scope and afro-centric in emphasis, with lots of examples from the region, and comparisons to other regions.
► Part II is focused on implementation, and explores five realms in which international law is tested on the ground – by courts, (peacekeeping) troops, the media, development efforts, and communities – all within countries emerging from civil war.
This section starts with a chapter that looks at each mechanism. Included are criminal trials, human rights education programs, efforts to empower women and engage youth through social programs and law reform, and grassroots dispute resolution traditions, and their incorporation into national truth commissions. Examples from each country help illustrate how these different mechanisms work – in collaboration, or at cross-purposes, or both.
Part II also has three country chapters, one each devoted to Uganda, Sierra Leone, and Burundi.
I went to each country in 2010 on short, intensive field visits, interviewing folks from academia, from non-profits, and from government. Only in Sierra Leone did I spend time in the provinces –otherwise I was in Kampala, Bujumbura, and Freetown.
My short trips to the three countries built on prior experience in Africa, including two years in the early 1990s when I worked with the U.N. High Commissioner for Refugees in Conakry, Guinea. There I worked with Sierra Leonean refugees. In addition, I spent six months in 2002-03 teaching international law at the University of Dar es Salaam, and did peace education work with Burundian refugees in western Tanzania. The trips I took in 2010 were vital – for the human connection and the chance to test ideas and listen to stories.
In a future blog post, I plan to share more coherent thoughts on the subject of women in war and peace and women’s role in transformative justice. Women’s suffering, perseverance, and agency, realized and unrealized, are themes that run through the book. At the same time, these are themes that need much more exploration, by all of us.
I close today’s post by thanking these women, of Ugandan, Sierra Leonean, Burundian, French and American and nationalities: Agnes Jattu Carew-Bah, Libby Hoffman, Binta Mansaray, Kassie McIlvaine, Zahara Nampewo, Agnes Nindorera, Rachel Odoi-Musoke, Maud Roure, and Mary Turay.
Their words contributed to Humanitarian Law in Action within Africa, and their work continues.
by Jennifer Moore at 5:01 AM