The ICC and Gender Justice 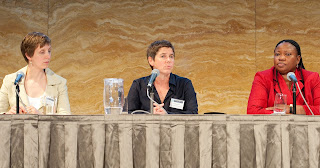 SYDNEY – Many insightful commentaries marked the excellent “Justice for All?” conference organized by the University of New South Wales this week. The conference, dedicated to examining the first decade of the work of the International Criminal Court, had a strong focus on exploring the Court’s record in the investigation and prosecution of sexual and gender-based violence.
I blogged Wednesday about the vision of gender justice outlined by Fatou Bensouda, the International Criminal Court’s Prosecutor-elect, in her February 14 speech.
Apart from Bensouda’s announcements, notable commentaries were delivered by:
► IntLawGrrl contributor Brigid Inder, Executive Director of the Women’s Initiatives for Gender Justice. (photo by Michael Anderson of conference panel featuring, from right, Bensouda, Inder, and yours truly, Valerie Oosterveld, courtesy of UNSW)
Inder highlighted the disturbing statistic that, while sexual violence has been charged in 8 out of 15 ICC cases, over 50% of those charges fail when tested at the confirmation of charges stage. This worrisome failure rate is due, she said, to three factors:
Inder argued that the ICC Office of the Prosecutor must boost its institutional capacity to address gender issues.

► Helen Brady (right), Senior Appeals Counsel at the International Criminal Tribunal for the Former Yugoslavia.
She discussed ways in which groundbreaking ICTY jurisprudence on gender issues can and should assist the ICC.

► Dr Kiran Grewal (left), Lecturer in the Department of Sociology and Social Policy at the University of Sydney.
Grewal began with the thought-provoking question “Do more prosecutions of rape by the ICC equal gender justice?”. The ICC’s definition of rape does not include an element of non-consent. She argued that we need to think carefully about whether this creates a binary, under which rape in war is somehow viewed as fundamentally different and worse than rape in peace, even though both forms of sexual violence grow from the same root: discrimination.

► Tina Dolgopol (left), Associate Professor of Law at Flinders University, Adelaide, Australia. (photo credit)
She urged the audience not to view ratification of the Rome Statute of the ICC as the end goal in an advocacy campaign. Rather, domestic law reform must accompany ratification, especially reform of laws that are discriminatory to women and girls. As she noted,

'Our desire to obtain universal ratification of the Rome Statute should not blind us to the physical, mental and sexual brutality that women face in their day-to-day lives'.

In other words, gender justice is necessarily a comprehensive package and is not only about ICC crimes.

► Amrita Kapur (right), an International Legal Advisor with the Women’s Justice Unit in the Judicial System Monitoring Programme of Timor Leste.
Kapur discussed the very interesting issue of how to measure gender justice in the complementarity evaluations made by the ICC Office of the Prosecutor. She provided this example of why such measurement is necessary: sexual and gender-based crimes undeniably took place during the conflict in Colombia, but the Office did not examine Colombia’s handling of these crimes in its complementarity evaluation. This is a concern, given that what the ICC focuses on in its complementarity evaluations will trigger what is improved in that country, and any other country also under ICC scrutiny. She proposed three areas of examination for complementarity evaluations:
This brief review gives you a sense of the breadth and depth of the gender-focused discussions at the conference, which were complemented many other impressive presentations on the other conference themes: the ICC and the Asia-Pacific region, and a look back at the ICC’s progress and challenges over the past ten years. The conference was bracketed by a lecture by famed playwright Eve Ensler, which took place on February 12, and a capacity-building workshop with representatives of civil society and National Human Rights Institutions in the Asia-Pacific region, which took place on February 16. All in all, the University of New South Wales and the Australian Human Rights Centre should be commended for a week’s worth of worthy events.
by Valerie Oosterveld at 6:10 AM