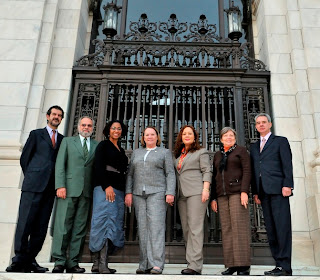 Within the construct and details of international human rights courts – and the systems that create and enforce them – there is often a disconnect between the violations committed as a matter of law and the nature of the harms suffered by the victims of these violations, their families and their communities.
It is far too easy for any judicial entity to become caught up in the trappings of law, and this is particularly so in the human rights context, where a strict discussion of the law can withhold the unpleasant realities of human rights law violations. The ability of a human rights court to institutionalize the depth of harms experienced by victims, as well as the depth of legal harms committed by the perpetrators, is an essential element for ending the disconnect.
My article, “Institutionalizing Human Rights in Latin America: The Role of the Inter-American Court of Human Rights System,” forthcoming in the Temple International and Comparative Law Journal, focuses on the phenomenon of internalizing human rights norms within the Inter-American Court of Human Rights system – collectively comprised of the Inter-American Commission on Human Rights and the Inter-American Court on Human Rights .
The process of internalization of human rights norms within the Inter-American Court of Human Rights system involves:
► Human rights activists,
► Persons who seek to remedy wrongs which they acknowledge as existing in society before them, and
► Juridical actors who use the powerful institutions of the Inter-American Court of Human Rights system in order to achieve the aim of highlighting and attempting to stop these practices.
The process of internalization within this system also involves:
► Bringing the harms suffered by victims, their families and their communities into the open,
► Acknowledging the wrongs done to them, along with the myriad impacts of these wrongs, and
► Preserving the dignity and core humanity of the victims of human rights violations.
My article discusses the role that the Commission has come to play as an advocate for those who have suffered human rights violations at the hands of a state or state actors. (credit for photo above of Commission members, from left, Felipe González of Chile, 1st Vice Chair José de Jesús Orozco Henríquez of Mexico, Tracy Robinson of Jamaica, Chair Dinah Shelton of the United States, Rose-Marie Belle Antoine of Trinidad and Tobago/St. Lucia, Rosa María Ortiz of Paraguay, and 2d Vice Chair Rodrigo Escobar Gil of Colombia)
Throughout the history of the Commission’s role in relation to the Court, the Commission has become increasingly active in advocating for those who allege substantial human rights violations, and that it ensures that these victims are seen by the Court as having essential humanity as well as legal standing and rights. My article argues that the Commission is the fundamental place for the institutionalization of the voices of human rights victims and those who support them.
The article then examines the jurisprudence of the Court, with a view to understanding how the Court uses itself as a tool of human rights.
It argues that the Court has expanded the concept of human rights protections in Latin America taking a holistic and humanity-based view, rather than functioning within a formalistic legal structure. In so doing, the article asserts, the Court reflects both on the reality of human rights violations and their impacts and on the importance of bringing these to light. At once, it validates the suffering and humanity of victims, and also chastises those states and state actors responsible for committing abuses against the populations they controlled.
by Alexandra Harrington at 6:00 AM