It's our great pleasure to welcome Jennifer Moore (left) as an IntLawGrrls contributor.
Jenny is Regents Professor of Law at the University of New Mexico School of Law in Albuquerque. She also served as the university's Director of Peace Studies, an undergraduate curriculum, from 2004 to 2006. Her law school courses include Human Rights, Immigration Law, International Law, International Legal Problems, and Refugee and Asylum Law, fields in which she's also published.
Along with Karen Musalo and Richard A. Boswell, both professors at California-Hastings College of the Law, Jenny's a co-author of Refugee Law and Policy: A Comparative and International Approach. This 1st-ever casebook on the subject is now in its 4th edition.
Before entering academia in 1995, Jenny worked for the U.N. High Commissioner for Refugees, as an associate protection officer in West Africa and then as a legal officer in Washington, D.C. In 2002-03, Jenny was in Tanzania on a Fulbright Scholarship, where she taught international law at the University of Dar es Salaam, and also planned and facilitated human rights workshops for Burundian in refugee camps.
These experiences formed the background for Jenny's forthcoming book, Humanitarian Law in Action within Africa, which she describes in her introductory post below.
Her interest in refugee issues began in college – she worked as a research assistant for the Refugee Policy Group after earning her bachelor's degree from Amherst. While a law student at Harvard, Jenny spent a summer conducting field research for Catholic Relief Services on the protection of Salvadoran refugees in Honduras. In summer 2000, she and her father interviewed a range of Croatians and expatriates working in Croatia for the War-Torn Societies Project International.
Jenny dedicates her post to 2 women:
► One is her paternal grandmother, Adeline Nichols Moore (1906-1992), pictured at left in the circa-1940s family photo below. Moore was an artist and 1928 alumna of Smith College who, "as a student at the Sorbonne in Paris was pressed into service to translate for Charles Lindbergh," when the aviator completed his solo transatlantic flight in May 1927. Jenny writes: 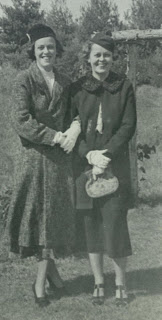 'Gran died while I was in West Africa, pregnant with my first daughter, Kyra Elizabeth. Addie Moore was a painter and a sculptress, who taught all her grandchildren about the stars. She became a Quaker in her early twenties.'

► Jenny also honors her godmother, Louise Rexford Wilson (1906-1995), pictured next to Addie Moore in the photo. In 1941 Wilson, the mother of an infant daughter, joined with her husband and directed a Civilian Public Service camp, at which conscientious objectors worked in lieu of World War II military service. She also was the author of a foreword to a collection of letters. Of Wilson, Jenny writes:

'Aunt Lou passed away shortly before I started teaching law, and just a few years before my daughter, Tessa Irene, was born. She was my grandmother’s dearest friend, and like Gran, Lou came to embrace Quaker teachings. My mother, Katherine, and I both often remind ourselves that Lou is our model for growing old with wit, wisdom, grace, and style. May it be so.'

Today both women join others honored at IntLawGrrls' foremothers page.
Heartfelt welcome!
by Diane Marie Amann at 6:20 AM