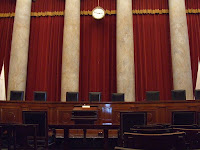 "Responsibility" is the word of today at the U.S. Supreme Court.
The Court's scheduled to spend this morning hearing argument in 2 cases that ask whether nonhuman individuals may be sued for human rights violations in U.S. courts.
► 1st up, at 10 a.m. Eastern time, is Kiobel v. Royal Dutch Petroleum, which, as posted, "presents the question of whether corporations can be sued for torts 'committed in violation of the law of nations or a treaty of the United States'" pursuant to the Alien Tort Statute. Arguing "yes" will be human rights lawyer Paul L. Hoffman and U.S. Deputy Solicitor General Edwin S. Kneedler; arguing "no," former Stanford Law Dean Kathleen L. Sullivan.
► Immediately following will be Mohamad v. Rajoub, which, as posted, "presents the related question of whether liability exists under the Torture Victim Protection Act (TVPA) for legal persons, in this case the Palestinian Authority and the Palestine Liberation Organization." Arguing "yes" will be Stanford Law Professor Jeffrey L. Fisher; arguing "no," Washington lawyer Laura G. Ferguson and an Assistant to the U.S. Solicitor General, Curtis E. Gannon.
Background on the issues at hand can be found in IntLawGrrls posts here, and on SCOTUSblog here. (credit for photo of Supreme Court's Grand Chamber)
And for Washingtonians, there's a Kiobel "Quick Response Panel" scheduled to take place at 8:30 a.m. Thursday; details and registration here.
by Diane Marie Amann at 4:01 AM