The Special Tribunal for Lebanon has released its opinion determining that it will proceed in absentia against the 4 individuals indicted for the assassination of former Prime Minister Rafik Harari.
By way of background, in August, 2011, a pre-trial judge (Daniel Fransen of Belgium, right) made public the amended indictment issued on June 10, 2011, against four co-accused:
Prior to that point, the indictment, which was confirmed on June 28, 2011, had at the request of the Prosecutor been under seal in order to “ensure the integrity of the judicial procedure” and enable the search for and apprehension of the accused. (See our prior coverage here). The 9-count indictment—which concerns the assassination of Hariri, the death 21 others, and the injury of 231 others—charges: 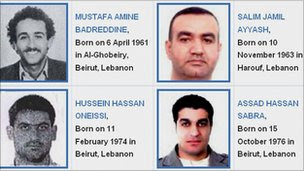 Much of the evidence against the accused is circumstantial and involves call data records from a number of networked and personal mobile phones that show surveillance on Hariri in advance of his death as well as coordination leading up to the assassination and the purchase of the Mitsubishi van that carried the explosives.
After Lebanese authorities failed to locate and apprehend the accused (including by conducting surveillance of last known addresses, serving the indictment on neighborhood leaders (mukhtars), issuing advertisements and public service announcements (see left), releasing an Interpol red notice, and establishing a hotline), the Tribunal ruled that it would proceed in absentia. Article 22 of the Tribunal’s Statute (along with Rule 106) allows such proceedings if the accused has absconded and

The Head of the Defense Office subsequently assigned permanent counsel to the accused.
This will be the first in absentia trial before an international tribunal since the Nuremberg Tribunal prosecuted Martin Bormann, Hitler’s Chief of Staff. Bormann reputably went into clandestine exile in South America at the close of WWII. (Some accounts indicate he had plastic surgery to conceal his identity). There are others who believe he died in the waning days of the Nazi regime. After being sentenced to death at Nuremberg, he was declared dead by a German court in 1973.
In other news, the contract of Daniel Bellemare, the current chief prosecutor of the Special Tribunal for Lebanon, expires this month.
He has already indicated that he will not renew his contract, apparently due to health concerns. His departure comes on the heels of the untimely death of Judge Antonio Cassese, former President of the Tribunal.
It remains to be seen whether further indictments will be issued under Bellemare’s watch. It has been reported that three more indictments are under consideration. These cover the assassination attempts of MP Marwan Hamadeh and ex-Defense Minister Elias Murr as well as the killing of a former Communist party leader, George Hawi. The Tribunal’s Statute allows the prosecution of cases that are similar to the Harari assassination in terms of “nature and gravity” as well as motive, the victims targeted, the modus operandi, and the perpetrators. Hamadeh has been outspoken in blaming Hezbollah for acts of terrorism in Lebanon, including the killing of Hariri.
The Tribunal is likely to suffer more delay as the new prosecutor gets up to speed. No names have been publicly floated for his replacement. No doubt the “runner’s up” for the ICC Chief Prosecutor position will be under consideration. (See our prior coverage here). The tribunal is thus very much at a crossroads. See our prior coverage here.
by Beth Van Schaack at 5:46 PM