University of Chicago Law Professor Eric Posner has spent much of the last decade criticizing the liberal legal response to post-9/11 government policies. In his review of my new book War Time – about which IntLawGrrls posted yesterday – Posner sticks to the script. But this leads him to miss a critical point: the book does not reinforce post-9/11 liberal thought but instead criticizes it.
What’s at stake here is the way the very concept of “wartime” works in contemporary American law and politics. Just in the past week, Defense Secretary Leon Panetta announced that the United States hopes to end its combat mission in Afghanistan in 2013. Meanwhile, at Guantánamo and elsewhere, the United States holds enemy combatants “for the duration of hostilities.” The “endings” of combat in Afghanistan and Iraq (prior IntLawGrrls posts) appear to have no consequences for the ending of detention. This illustrates a difficulty: there is a disconnect between the wars the United States is ending (Iraq and Afghanistan), and the war that has justified detention (the war on terror). President Obama generally has not employed the Bush Administration’s idea of a “war on terror,” but the war on terror continues to serve as the basis for detention.
This particular disconnect helps to uncover a more enduring problem of the misfit between the way war is conceptualized and the military conflicts the nation engages in. In War Time, I argue that this is not a new phenomenon. It has been of great importance at least since the Cold War. Uncovering the disconnect could enable more transparent decision-making – whether it be liberal-leaning or conservative.
Posner gets distracted by the usual right/left argument about war and civil liberties, and he reads the book as taking a position on the left side of that debate. I will address why this is a misreading in a later post (my argument is more about the scholarship on civil liberties, identifying a conceptual problem on both the left and the right), but right now let me take up what the book is actually doing.
A reader looking for conventional liberal complaints about post-9/11 government policy might be puzzled, as Posner is, about the reason the book spends so much time talking about time itself. The book is not a traditional historical narrative, but a work of critical historiography and intellectual history. It is short because it focuses on just one thing: the way ideas about time are part of the way we think about war, as captured in the very term “wartime.”
That temporal thinking is built into the way war is conceptualized goes back at least to the British political theorist Thomas Hobbes, who wrote in The Leviathan (1660):

'War consisteth not in battle only, or the act of fighting; but in a tract of time, wherein the will to contend by battle is sufficiently known; and therefore the notion of time is to be considered in the nature of war.'

“Wartime” itself, on its own terms, is a temporal concept. The purpose of my first chapter is simply to point this out. I turn to the French sociologist Émile Durkheim and others to explain that we tend to think of time as a natural phenomenon, yet ideas about time are a cultural feature. Our wartime thinking is therefore not determined by the nature of time itself, or the nature of war. Like other kinds of time, it has its origins in social life.
The basic structure of wartime thinking is that there are two kinds of time, wartime and peacetime, and history consists of moving from one kind of time to another. Because wartime is thought to always be followed by peacetime, war is, by definition, temporary. This matters to the way scholars do their work. I tend to find the right/left, conservative/liberal dichotomous contemporary discourse to be unhelpful, but if one is thinking in these terms, both liberal and conservative writers tend to do their research and analysis about war in history by comparing periods of war with periods of peace. For example, in this way of thinking, between World War I and World War II is a peacetime, also called the “interwar” years. Periods of peacetime are at least implicitly compared with wartime in order to understand wartime’s impact. When collecting data, the wartime data exists in between the dates of beginnings and endings of wars, for example between Pearl Harbor and V-J day.
I then take up the question of whether this cultural concept of war’s time fits with 20th century experience. The rest of the book is devoted to illustrating different misfits. My starting point is to compare the framing of wartimes and peacetimes by scholars against U.S. military engagements during the 20th century. There are many measures of military conflict. For the book, I use U.S. military campaign service medals, most of which are for military service under fire. The reason for using this data is that Congress enacted medal legislation creating the different medals, giving us an official statement that particular conflicts warrant military campaign service medals. Another measure with a similar result would be membership criteria for the Veterans of Foreign

Wars. The way wartime tends to be characterized by scholars is at right, and here. The way wartime looks from the perspective of medals for service in U.S. military engagements is below, and here. (Please note: a number of medals are removed from the timeline published in the book. I will update the online timeline as soon as I can. The basic concept remains the same: war all over the timeline.) The medals chart is always the most talked about slide when I speak about this project. There has been much scholarship on smaller wars in American history, but readers find it illuminating to see a broader swath of U.S. military engagement plotted on a timeline. 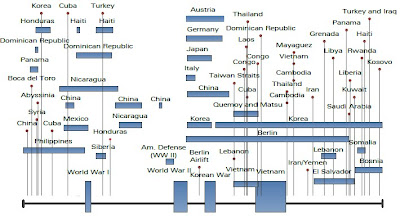 Later chapters take up particular examples. A reaction to my argument might well be that some wars really have been bound neatly in time. That’s why I discuss World War II, a war that continues to frame our thinking about what war really is, as Boston University International Relations Professor Andrew Bacevich argued in a recent lecture. Chapter two shows that even this iconic war was fuzzy around the edges. For this reason, scholarship on the impact of World War II on American law can’t be cabined within tidy temporal boundaries, but must contend with the way the war spreads out before and after.
The Cold War is an interesting moment in our temporal thinking about war. On it’s own terms the Cold War is ambiguous. War isn’t thought to be cold, after all. During the Cold War, American leaders debated whether peacetime as a concept had ceased to exist, so that the nation faced permanent wartime. Scholars writing about the impact of the Cold War on civil liberties tend not to engage the historical literature about this war’s liminality, and instead shove it back into the conventional wartime/peacetime framework, allowing them to compare this wartime with others.
Post-9/11 we see a similar move. It is an ambiguous era, so scholars end up abandoning the terms wartime and peacetime. They come up with new terms, and wartimes in the past are renamed crisis times so that they can serve as data points against which to compare our new crisis time. There are some important efforts to rethink wartime, including Harvard Law Professor Mark Tushnet’s argument that we should think of contemporary war as an ongoing condition, not a confined wartime, and some of the work on the idea of a “long war.” But at least for the first decade post-9/11 scholars tend to stick with the basic conceptual framework: the idea that there is a normal or non-war time that is periodically ruptured and restored in American history, even if the future seems murkier.
On the right, on the left, and in between, many have been taking up the issue of ongoing U.S. military engagement. In that sense, there is nothing novel about my argument. But scholars, public policymakers and courts often persist in working within a wartime/peacetime model. In this work of critical historiography, my limited goal is to simply point out the misfit. If we step back from this temporal framing, perhaps we can better understand the role of war in the history of American law and politics. Reconstructing the historical narrative without the time boundaries is not the project of this book, but of my next one.
To read for yourself, the book is here, the introduction is here, and a related law review article can be downloaded here. And if you're in the DC area, please come talk with me about the book at Politics and Prose Bookstore, Sunday, February 19, at 5:00 p.m.

(Cross-posted at War Time, Balkinization, and Legal History blogs; a second post in this series is here.)