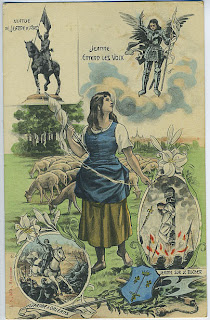 'Prosecuting dead people has only happened a few other times in history. Such dead defendants included Joan of Arc, Thomas Becket, John Wycliffe, and Martin Bormann. The Catholic Church banned the practice centuries ago. In modern jurisprudence prosecution of the dead is unheard of, particularly by civilized nations who respect the rule of law. We simply do not try the dead. This Russian example of justice brings shame to the rule of law and discredit upon its judicial system.'

-- Our colleague, Syracuse Law Professor David M. Crane, in a Jurist commentary that criticizes a plan "to put on trial a dead man, Sergei Magnitsky, a lawyer, who died in prison from the effects of his imprisonment and torture by the Russian Government in November 2009." (credit for card depicting Joan of Arc/Jeanne d'Arc -- including her death in 1431, at age 19, by burning at the stake)
by Diane Marie Amann at 12:03 PM

FWIW, the absent Martin Bormann was tried at Nuremberg during 1945-46 because he was not known/proven to be dead. The pretrial argument and IMT ruling is here: http://avalon.law.yale.edu/imt/11-17-45.asp. (N.B. the USSR position there, which has some relevance in thinking about the Russian approach today to Magnitsky.)

Thus Nuremberg is entirely (or nearly entirely, depending on how one reads and thinks about the USSR position stated in spare/cryptic fashion by Col. Pokrovsky) on David Crane's “real law doesn’t try dead people (or even the incompetent)” side of assessing what Russian is proposing to do to the ghost of Magnitsky.