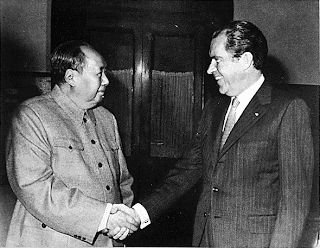 On this day in ...
... 1972 (40 years ago today), Richard M. Nixon (far right), then the President of the United States, began a weeklong state visit to China that was, in the words of the BBC, "aimed at ending 20 years of frosty relations between the two countries." An "unexpected audience" with Mao Zedong (near right), the Chinese premier, occurred. (photo credit) The Cold War-era trip, which included banquets and a walk on the Great Wall, and ended with the landmark Shanghai Communiqué, would garner much publicity and open the door to trade and other Sino-American exchanges.
(Prior February 21 posts here, here, here, here, and here.)
by Diane Marie Amann at 3:04 AM