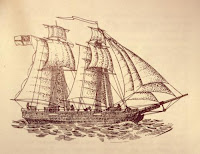 On this day in ...
... 1812 (200 years ago today), Chief Justice John Marshall delivered the opinion of the U.S. Supreme Court in The Schooner Exchange v McFaddon, involving a dispute over a French warship in a U.S. port. (credit for image of "Nancy," another schooner of the time) Heeding a suggestion from the Executive Branch, and citing the “perfect equality and absolute independence of sovereigns," as well as the "common interest impelling them to mutual intercourse," the Court declined on ground of sovereign immunity to exercise jurisdiction. Although the decision led to an era in which foreign sovereigns enjoyed absolute immunity from suits in U.S. courts, one hears echo of Marshall's indication that foreign warships might be treated differently from foreign commercial ships in the doctrine of "restrictive" sovereign immunity, by which states may be sued in specified exceptional circumstances. Congress codified the latter doctrine in the Foreign Sovereign Immunities Act of 1976, coincidentally a statute about which we posted yesterday.
(Prior February 24 posts are here, here, here, here, and here.)
by Diane Marie Amann at 3:04 AM