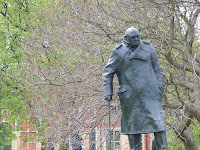 On this day in ...
... 1952 (60 years ago today), at the House of Commons, Prime Minister Winston Churchill announced that Britain had developed "her own atomic bomb and has the plant to insure its regular production," The New York Times reported. (credit for statue of Churchill in Parliament Square, London) The development had given Britain bargaining power vis-à-vis its chief Western ally, the report further indicated: "He suggested that, as a result, the United States was more amenable than formerly to the idea of an exchange of information about the progress of research into nuclear fission." Twelve years later, with the signing of the Non-Proliferation Treaty, Britain would become one of the few countries besides the United States authorized to continue maintaining nuclear weapons.