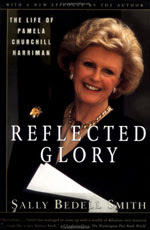 On this day in ...
... 1997 (15 years ago today), Pamela Harriman (left) died at age 76 in Paris, where she had been serving as U.S. Ambassador to France since 1993. She suffered a fatal cerebral hemorrhage after "her usual swim" at the Ritz Hotel. Born Pamela Digby into an aristocratic family in England, and sent as a girl to "finishing school" in Paris and Munich, at age 19 she married the son of Winston Churchill; she became a protégée of her father-in-law, a London hostess noted for bringing Americans and British together. As a divorced mother after World War II, she moved to Paris, married a Broadway impresario, became a widow, and then married for the last time, to Democratic insider W. Averell Harriman. She became a U.S. citizen, and in the Reagan years established her new home in Washington as "a headquarters of sorts for the party in exile." (credit for cover of 1997 biography, by Sally Bedell Smith) In an obituary that dwelt overmuch on her marital and extramarital liaisons, The New York Times wrote of her ambassadorial tenure:

That she was a woman with a past enhanced her standing with the French. Her energy went into 16-hour days dealing with questions of international trade, NATO expansion and the war in Bosnia, and working the telephone to Washington late into the night, trying to forestall cuts in the Foreign Service budget. She loved every minute of it.

A year before her death, Harriman had summarized her "happy life" for The Times:

'I drank deep of the well.'