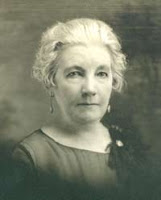 On this day in ...
... 1867 (145 years ago today), a daughter was born to pioneer parents in a log cabin in eastern Wisconsin. By age 17 she was teaching school in the Dakota Territory to which her itinerant family had traveled. There she married at 18. Laura Ingalls Wilder (left) her husband, and their 8-year-old daughter settled in 1894 in Mansfield, Missouri. In 1932, she published Little House in the Big Woods. (credit for mid-1930s photo) Set in the place of Ingalls Wilder's birth, it would be the 1st of a series of 9 books, all written

with the aid and support of her daughter, writer-journalist Rose Wilder Lane (right). (credit for undated photo) Each book treated late 19th C. pioneer life, not only in Wisconsin, but also in Kansas, Minnesota, and South Dakota. The books have been translated into more than 40 languages. Ingalls Wilder died in 1957; Wilder Lane, in 1968. The Missouri farm is now a museum.