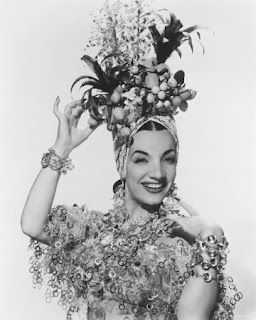 On this day in ...
... 1909, Carmen Miranda (right) was born Maria do Carmo Miranda Da Cunha in a village in the Marco de Canavezas province of Portugal. (photo credit) Her family moved to Rio de Janeiro, Brazil, in 1910. It was there that she later launched her career as a samba singer; in 1929 she recorded her first album, which led to a contract with RCA Records. After 10 years she was invited to New York City to perform on Broadway in Streets of Paris and later Sons o' Fun. She starred in her first feature film in Brazil in 1939, Alô Alô, Brasil, and would go on to star in a host of popular Hollywood films. Many of the film scripts, set in Latin America, were reportedly reviewed by the Office of Inter-American Affairs, to ensure their promotion of President Franklin D. Roosevelt's Good Neighbor Policy. Carmen stood under 5' tall, so she would perform in nearly 8" platform shoes, and wore hats to increase her size on stage. She made all her own costumes, having worked in hat shops and retail stores as a teenager. Her famous fruit hat costume, worn in Week-end in Havana (video clip of her performance in that film here), a stylized blend of traditional baiana dress and carnival character, would become iconic. Dubbed the "Brazilian Bombshell," at the peak of her career she was reportedly the highest paid woman in Hollywood (some sources even say the United States). She died of a heart attack at the age of 46 in 1955. Her style has had a lasting impact on popular culture, right down to this 'Grrl, who writes a blog in Carmen's honor.