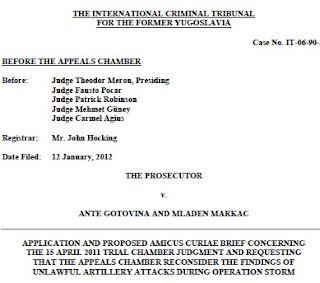 In yesterday's post, I highlighted the conclusions in the recent report published by the Emory International Humanitarian Law Clinic, which I direct, on the application of international humanitarian law in the April 15, 2011, judgment of Trial Chamber I of the International Criminal Tribunal for the former Yugoslavia in the case of Prosecutor v. Gotovina. The report:
► Details the consensus views from a meeting of military operational law experts regarding the legal flaws in the application of the international humanitarian law relating to targeting and, in particular,
► Highlights a range of broader institutional concerns regarding the longer-term effects of the judgment.
The experts’ roundtable discussion, which took place on November 4, 2011, at Emory Law School, grew out of the efforts of a number of operational experts in the United States and abroad to prepare an amicus brief (above left) in the ICTY appellate proceedings.
As one of these experts, South Texas Law Professor Geoffrey S. Corn – who served as an expert witness on the law of war for the Defense during the trial phase of the case – explains in this post on Lawfare blog, the Trial Chamber’s ruling raised serious questions about how it assesses a commander’s potential culpability in the course of sustained operations against military objectives in a populated area.
In mid-January, twelve of us international and operational law experts submitted the amicus brief to the 5-member ICTY Appeals Chamber that will hear the Gotovina appeal at the tribunal's Hague headquarters (below right). (photo credit) 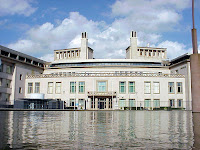 The ICTY Office of the Prosecutor contested the admissibility of the amicus brief, and the defense responded. The Appeals Chamber has not yet ruled on admitting the brief, but is expected to do so soon.
Why is this one case producing such extensive discussion and critique?
► First, it is likely to be the only case in which the ICTY assesses complex targeting decisions involving the use of artillery against a range of military objectives in populated areas during a sustained assault.
For this reason, the application of the law therein may well have significant effects on how IHL is applied in future situations, both in courts and real-time in military operations.
Think about the effect that the May 1997 judgment in Prosecutor v. Tadić has had on the definition of armed conflict and all related analyses, for example.
► Second, the marriage of operational law and the elements of criminal accountability are intimately linked here, perhaps more than in any other case.
In focusing on the portions of the judgment analyzing artillery attacks against objectives in the City of Knin and the application of IHL to this targeting process, the amicus brief highlights the tensions inherent in this fascinating relationship between prospective planning, real-time operations, and post-hoc criminal processes
► Finally, and especially for all of us who teach in this area, this case offers a terrific opportunity to explore the linkages between international criminal accountability and the conduct of military operations.
How the law is applied does not only impact the culpability of the individual charged in any one case. Rather, the application of the law and how such application can be implemented effectively through training, doctrine and planning of operations are essential to ensuring the lawful conduct of future operations.
Keep an eye on the appeals process in this case – it promises to be interesting!
by Laurie Blank at 6:50 AM

I believe you meant to reference Geoff Corn, not Bobby Chesney. The post to which you link is written by Corn -- and Corn is the defense expert mentioned in the Trial Chamber's judgment.

Yes, that was an editor's error (sorry Laurie!) -- now corrected in the text. Thanks, Kevin. Diane