The United States is sending this week a delegation of diplomats to Sri Lanka to encourage the government there to respond to allegations that upwards of 40,000 civilians were killed in the government's campaign to defeat the Tamil Tigers of Tamil Eelam (LTTE). The delegation will apparently include:
The Sri Lankans are not exactly putting out the welcome mat. 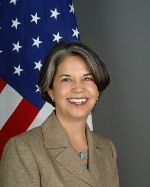 The visit comes in advance of the next meeting of the United Nations Human Rights Council in Geneva, which will run February 27 - March 23. It is rumored that the United States, along with others, will be sponsoring a resolution to press Sri Lanka to more credibly investigate alleged war crimes.

By way of background (see prior posts here and here), in a meeting with Secretary-General Ban Ki-Moon, the government of Sri Lanka agreed to take measures to address accountability for war crimes committed during the Sri Lankan civil war, which dragged on from 1972 to 2009. Of particular concern is the conduct of government forces in the brutal final battle that resulted in the collapse of the Liberation Tigers of Tamil Eelam (LTTE). The challenge has been to pin the government down to its commitment in the face of an ethos of triumphalism, institutionalized impunity, entrenched militarism, and ongoing human rights violations (such as restrictions on the media, the retention of wartime special powers measures, and persistent exclusionary policies).

In an effort to ward off a United Nations initiative, the government appointed a truth commission, entitled the Lessons Learnt and Reconciliation Commission, that focused on events following the failure of the 2002 ceasefire. The Commission's report (available here) has been commended for acknowledging grievances and for making credible recommendations on governance and land issues. It also acknowledged some civilian deaths (a departure from the standard government line) and the need for some measure of accountability. But it largely reads like a whitewash when it comes to providing any thorough investigation of violations of international humanitarian and human rights law. For example, the report concluded at para. 4.262:


In evaluating the Sri Lanka experience in the context of allegations of violations of International Humanitarian Law (IHL), the Commission is satisfied that the military strategy that was adopted to secure the LTTE held areas was one that was carefully
conceived, in which the protection of the civilian population was given the highest priority. The Commission also notes in this regard that the movement of the Security Forces in conducting their operations was deliberately slow during the final stages of the conflict, thereby evidencing a carefully worked out strategy of avoiding civilian casualties or minimizing them.


Unlike prior such commissions in the past which had the support of the Security Council (e.g., in the former Yugoslavia, Rwanda, Pakistan, and Lebanon), this panel came from the Secretary-General's office. Given strong support for Sri Lanka by China, it was clear the Security Council would not support such an effort. Perhaps as a result, the COE received no cooperation from the government.
The panel was to advise the Secretary-General regarding the modalities and applicable standards for an accountability process and conduct an inquiry into the “nature and scope of alleged violations” (although it was not to be a “fact-finding" mission or "investigation”). Its report, issued March 31, 2011, over the objections and machinations of the Government of Sri Lanka, is available here. The report noted grave discrepancies between the government's evaluation of the war and other accounts, which reported the persecution of the civilian population (including rape and summary execution), violations of the principles of distinction and proportionality (such as the the shelling of safe havens and hospitals), and blocked humanitarian aid. It also recounted abuses by the LTTE, including the shooting of fleeing civilians,forced labor/recruitment, the use of human shields, and the enlistment of child soldiers. It was also critical of the LLRC from the perspective of its impartiality, independence, mandate, methodology, and results.

The Secretary-General's COE's recommendations include:
Let's hope the U.S. delegation is able to make some progress on these issues... Stay tuned.
by Beth Van Schaack at 1:59 PM