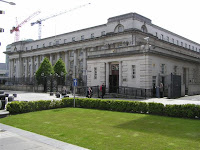 The phenomenon of organized crime often is depicted in political rhetoric across the United Kingdom and Ireland as constituting a predicament that warrants extraordinary reactions. Consequently, the corpus of law originally used to address subversive crime deriving from the political situation in Northern Ireland has provided a prototype both in form and in substance for dealing with such crime, ranging from laws relating to:
► Prolonged pre-trial detention periods,
► Use of anonymous witness evidence, and
► Civil forfeiture of assets.
These measures are employed against organized crime either: through the direct use of counter-terrorism legislation, which has been framed sufficiently broadly as to permit application to a broader range of suspected criminality; or through the subsequent imitation of such statutes. (credit for photo above of Royal Courts of Justice, Belfast)
In contrast, the United States, another common law country which has sought to address organized crime through novel and robust measures, at least for now maintains a sharper distinction between the procedural reactions to organized crime and terrorism.
In my new paper, The Trial of Organized Crime in the UK and Ireland: The Terrorist Legacy, I undertake a comparative examination of these trends. This post summarizes my research; comments welcome.

Non-jury trials
One particular response to the threat of organized crime is to hold non-jury trials so as to preclude juror intimidation, as may arise in such cases. This response occurs in the United Kingdom and Ireland. In Ireland non-jury trials are permitted under the terms of pre-existing counter-terrorism legislation, while contemporary legislation has been introduced to facilitate trials without jury in in the United Kingdom (though not in Scotland). (credit for photo of "Old Bailey" courthouse in London)
In contrast, the abolition of jury trials for suspected organized crime has not been considered in the United States, notwithstanding other robust U.S. reactions to this category of criminality, and despite the holding of non-jury trials for terrorist offences in limited circumstances.
Though ostensibly comparable in substance and consequence, it is of critical importance as to whether the state permits non-jury trials by employing pre-existing counter-terrorism statutes or whether it constructs new, albeit imitative, laws, as this may determine the ability of the courts to intervene and monitor the application and scope of such provisions.

► Existing emergency legislation permits the holding of non-jury trials on the order of the Director of Public Prosecutions; and
► Certain organized crimes have been equated with terrorist crime in terms of the perceived threat to the jury which leads automatically to non-jury trials. (credit for photo of Four Courts building in Dublin)
In contrast, despite undeniable public concern, organized crime is not portrayed as an emergency or crisis of sorts in the United Kingdom (nor, indeed, in the United States). Non-jury trials in limited instances are deemed to be warranted; however, the British political and legal approach is not to extend existing counter-terrorism legislation. Rather, it is to enact a new statute, which permits such a trial only after court order when a risk is established and when protective measures would not suffice.

Problematic issues
Broadly speaking, the selective holding of non-jury trials is problematic, as it may compromise the right to equality, and the decision makers may become “case hardened”, thereby altering the quality of adjudication.
Nonetheless, an arguable case may be made that the risk to the safety of the jury may indeed warrant such an approach in certain limited instances, and that the limitations on rights are not disproportionate. While plausible alternatives exist, non-jury trials may indeed sometimes be necessary given the potential threat to the jury, the size of the particular country or the nature of a society.
If this is so, they should be situated within the usual criminal justice context, rather than the adoption of an emergency model like in Ireland. Locating non-jury trials in the emergency realm raises concerns about:
► Choice of decision-making power, especially if this is guarded from review; and
► Equating by the legislature of organized crime with terrorism, which is deemed automatically to pose a threat to the jury.
If such an atypical mode of trial for one type of serious crime is to be adopted, a risk-based judicial scheme equivalent to that in the United Kingdom is crucial to ensure adequate and appropriate oversight.

A Cautionary Tale
While one may argue that non-jury trials are less pernicious than other special measures – pre-trial detention, for example. But the use in Ireland of such a counter-terrorism measure against organized crime illustrates how deviations from criminal justice principles and, indeed, constitutional norms in times of emergency, broaden the parameters of what is deemed permissible against other types of criminality. 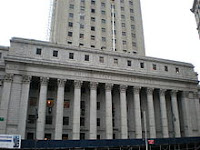 Thus the Irish experience sends a cautionary message to the United States (credit for photo of U.S. courthouse in Manahattan), in:
► Demonstrating how counter-terrorism tactics may become normalized; and
► Highlighting the importance of tightly defined extraordinary legislation.
by Liz Campbell at 6:00 AM