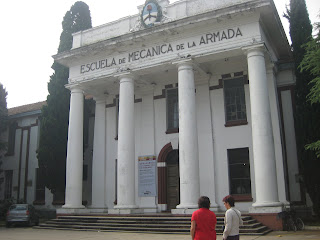 To what extent should the right to truth be able to trump the right to privacy in countries struggling to identify the disappeared?
And are there better options that can satisfy those who seek the truth and those who wish to protect their privacy?
These are the questions I address in my article, "A Conflict of Interests: Privacy, Truth and Compulsory DNA Testing for Argentina’s Children of the Disappeared," recently published in the Cornell Journal of International Law.
Between 1976 and 1983, when a military dictatorship controlled Argentina, thousands of people were disappeared, including an estimated 500 children who were either disappeared along with their parents, or born in the clandestine detention centers where the government held their mothers. These children were then given up for adoption, often to couples sympathetic with the government, and sometimes to the very people who killed their parents.
Perhaps the most well known of these centers was, as IntLawGrrl Naomi Roht-Arriaza has posted, ESMA, the Navy School of the Mechanics, which sits in the middle of Buenos Aires. The ESMA building, which I photographed above right, also contained a maternity ward where pregnant desaparecidas gave birth before they were killed.
ESMA is now part monument to memory and part evidence in the criminal trials that are ongoing.
Among the various groups pushing for justice in the wake of these atrocities was the Abuelas de Plaza de Mayo, a group of women whose children had been disappeared with their own children or while pregnant.

The focus of the Abuelas (logo at left) is not on finding their children, but on finding the “living disappeared,” the grandchildren they believe are still alive. (image credit) Their newest effort to identify these now-adult children has been controversial.
In 2009, the Argentine Congress amended a portion of the criminal code to provide that a judge may order mandatory DNA testing in any case where it is necessary to establish the identity of someone charged with a crime, or to confirm important circumstances of a criminal investigation. If the person so ordered refuses DNA testing (prior post), the judge can order the seizure of personal items. There is no recourse for the person who wants her privacy protected. Unsurprisingly, this law is being used as a way to identify children of the disappeared, even if these adult-children wish to remain anonymous.
The Abuelas view the law as a triumph of the right to truth; many children of the disappeared view it as an invasion of their right to privacy.
Those who, like the Abuelas, support this law say that it furthers several important and legitimate governmental goals:

► Restoration of identity for the living disappeared;
► Identification and prosecution of the raising parents who illegally adopted their children; and
► Clarification of the historical record.
Although there are some adult-children who have sought information about their identities and who have volunteered their DNA to the national database, other adult-children would prefer to stay in the shadows and want to protect their privacy. For these adult-children, taking a DNA test betrays the parents who raised them. They also, understandably, have concerns about having a role – forced or voluntary – in a court case against their raising parents.
The DNA law favors the right to truth over the right to privacy, but other options – the imposition of substitute charges or the grant of an amnesty in return for the truth – can maximize satisfaction on both sides.
Substitute charges mean that the raising parents would be charged not with illegal adoption or falsification of registration papers, for example, but with lesser charges, such as impeding an investigation, thereby avoiding the true charges for political reasons. As example of this occurred a decade ago in Serbia, which indicted Slobodan Milosevic, former President of Serbia and Former Republic of Yugoslavia, on charges of corruption and political assassination, rather than for genocide and war crimes.
In the Argentine case, the use of substitute criminal charges would encourage reluctant adult-children to come forward and submit to a DNA test at the court’s request, as opposed to being forced to do so by the court’s order. The adult-children would be giving up their privacy voluntarily, and at the same time, the identification of the adult child’s biological origins would be revealed, appeasing the Abuelas’ desire for truth.
The problems with substitute charges, however, are twofold:
► First, knowing that any charges, even if they are lesser charges, will be imposed may prevent the adult children from complying with a court order requiring DNA testing.
► Second, the use of substitute charges risks creating a false historical record. The truth may come out in the media, but the court record will not accurately reflect the crimes committed by the raising parents.
A second option addresses both shortcomings of substitute charges.
If the Abuelas are sincere in their stated goal of restitution of identity and biological origins, offering amnesty in exchange for information to the raising parents could result in a workable solution for both the biological families and the adult children. To be successful, an amnesty-for-information initiative would need to require that the raising parents provide a full accounting of the facts surrounding the adoption. The information provided would create an accurate historical record and serve the goals of the Abuelas.
With the burden on the raising parents to provide information, the adult-children would, in some instances, not need to provide DNA if the facts were clear as to the adult-child’s biological parents, thereby holding onto the adult-child’s right to privacy. In the event that the raising parents’ testimony does not allow for conclusions about the adult-child’s biological origins, the adult-child, armed with the information that he or she has a biological family, may opt to take the DNA test, regardless, thus providing the Abuelas – and society – with information about his or her biological origins.
The dual quest for truth while maintaining privacy does not have to result in the exclusion of one right over the other.
Although the momentum over the past twenty years has been prosecution-focused, other options do exist. Argentina has a legitimate desire to learn the truth about what happened to the children stolen during the dictatorship, just as the adult-children suspected to have been stolen have a legitimate desire for privacy regarding their biological origins. Exploring options other than criminal trials may result in a solution that respects both the right to truth and the right to privacy.
by Elizabeth B. Ludwin King at 5:00 AM