Téa Obreht, a critically acclaimed young novelist, wrote the following at page 283 of her debut novel, The Tiger’s Wife (2011):

'When your fight has purpose– to free you from something, to interfere on the behalf of an innocent – it has a hope of finality. When the fight is about unraveling – when it is about your name, the places to which your blood is anchored, the attachment of your name to some landmark or event – there is nothing but hate, and the long, slow, progression of people who feed on it and are fed it, meticulously, by the ones who come before them. Then the fight is endless, and comes in waves and waves, but always retains its capacity to surprise those who hope against it.' 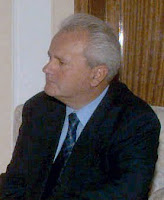 Obreht was referring, in the quote above, to the civil war fought in the former Yugoslavia in the 1990s. As many readers may remember, Serbian leadership, and in particular, Slobodan Milosevic (right; prior IntLawGrrls posts), were largely blamed for the worst of the bloodshed in that civil war. (credit for 1996 photo)
The situation in Syria today resembles Serbia in the 1990s.
Although many commentators have compared Syria with Libya, Syria, in my view, looks more similar to Serbia.
► First, Syria today, as Serbia in the 1990s, is ruled by a long-standing dictator, President Bashar al-Assad (below left), whose leadership revolves around a personality cult and who does not face any serious internal political opposition. (credit for 2011 photo)

Assad, like Milosevic, is shrewd and smart and enjoys the support of a substantial portion of the population. Assad, like Milosevic in his heyday, has managed to win support of his ethnic group, the Alawites, and has pitted Alawites against other ethnic groups in Syria. In fact, Assad has successfully persuaded Alawites (and some Christians) that only under him can they remain safe against the country’s Sunni majority. (Also see here.)
Many will remember how Milosevic played the Serbian nationalist card in Kosovo in the late 1980s, and how he infamously declared to a group of minority Serbs gatherehttp://www.blogger.com/img/blank.gifd in Kosovo Polje:

'No one has the right to beat you…. No one will beat you ever.'

Milosevic rose to power precisely because he persuaded a segment of the Serbian population that only he could adequately protect them from the rise of other ethnic groups in the former Yugoslavia. Many of his policies throughout his reign as leader of Serbia centered on the premise of protecting and developing a larger Serbian state. Even when such policies proved detrimental to Serbia, and when no other state supported such expansionist visions, Milosevic remained true to his personal dream of a greater Serbia.
Today, Assad seems to be on the same path.
Yesterday, the United Nations General Assembly overwhelmingly voted for Resolution A/66/L.36 (full text here), which supported an Arab League plan that had called for Assad to step down and which had condemned human rights violations committed by the Assad regime.
The Arab League plan, adopted on January 22, urged for the transfer of power from Assad to the Syrian vice-president and for the establishment of a transitional government, before internationally supervised presidential and parliamentary elections, which would occur within a few months. This General Assembly resolution, although not legally binding, reflects the world opinion and highlights the almost universal condemnation of the Assad regime by the majority of states.
Assad has isolated Syria from most of the world, and he has deluded himself into clinging onto a vision of Syria as the key player in the Middle East. Assad’s leadership centers around protecting Alawites, protecting Assad personally as the long-standing president of Syria, and opposing anyone who objects to such goals, including most of the Arab League countries. Assad has been largely detrimental to Syria.
Moreover, like Milosevic in the late 1990s, Assad has backed himself in a corner. In the wake of daily United Nations’ discussions on Syria and repeated calls for him to step down, there does not seem to be any way for Assad to survive the crisis in Syria and remain the country’s president. Thus, very little incentive remains for Assad to listen to the world community and to halt slaughtering civilians.
Milosevic found himself in the same situation in the late 1990s because of his stance on Kosovo. Milosevic did not care about how many people died in Kosovo, because he knew that his own demise as leader of Serbia was imminent. Similarly, Assad does not care about the bloodshed in Syria because he knows that the world community has condemned him. Sadly, Assad, like Milosevic ten years ago, seems to think that the only way he can stay in power is by brutally repressing any internal dissent – as if exercising control internally could quell all international protests and calls for his resignation.
► Second, Syria, like Serbia in the 1990s, is condemned by the West but supported by Russia, a financial and military power house. In both instances, Russian support of Milosevic and Assad has prevented any United Nations-authorized military action from taking place in these countries.
In the 1990s, Russia repeatedly vetoed Security Council resolutions that would have authorized the use of force against Milosevic, in order to protect Kosovar Albanians from the latter’s brutal tactics of oppression.
This year, in 2012, Russia (along with China) vetoed a resolution condemning Assad. Although most Western diplomats have publicly condemned Russia for its protection of the brutal Assad regime, there is very little that any Western nation can do in light of Russia’s veto power on the U.N. Security Council.
Most readers will remember that the military intervention against Serbia in 1999 took place within the auspices of NATO, not the United Nations, and that such military intervention was never authorized by the Security Council. Thus, some scholars have referred to the 1999 NATO intervention as evidence of an emerging customary norm of international law on humanitarian intervention. Today, countries could form a military alliance and launch a humanitarian in Syria in order to protect civilians and to force Assad to step down. Justification for such humanitarian intervention could be found in the Kosovo precedent. Whether any such military action against Assad’s regime will ever take place remains doubtful, although it is, in my view, legally possible.
► Third, Syria, like Serbia, views itself as historically aggrieved, because of centuries of colonial and other occupations which have been detrimental to these countries’ developments.
Milosevic aspired for Serbia to dominate the Balkans; Assad hopes that Syria, along with Iran, would dominate the Middle East. The Balkans have been ravaged by multiple civil and international wars over the last century. The Middle East has been similarly unstable. Expansionist visions driven by historical grievances embraced by Milosevic and Assad have exacerbated matters internally within Serbia and Syria, as both of these leaders found remedies for perceived historical wrongs in the oppression of other ethnic groups and the repression of any political dissent. For Milosevic, Serbs could rise at the expense of Kosovar Albanians; for Assad, Alawites can persevere if Sunnis are oppressed.
Because of similarities between Milosevic and Assad explored above, it is likely that the end to the Syrian violence may not come until and unless Assad is forced to step down. If Milosevic had not been ousted from power, Serbia might have still been under his grip today.
by Milena Sterio at 6:10 AM

Open your eyes lady, and dont inform yourself threw CNN...

America started war in Yugoslavia, because they have their goals, they are actualy very racional. Internatioan law, rights, well whole that is just a story for children. There is no international law there is only law of the powers, bulies.

When you saying something about Kosovo Serbs and Albanian, i will tell you something: I am Serb from KOsovo, and if we today can get the same rights as Albanians had in 90s with Milosevic, we would be the happiest people on the world. But it will never hapened. They are killing us every day and you just watching it, do nothing.

And about Syria, well you know nothing. You should go there, find some Syrians then talk about it.When you finish (I mean you americans) with Syria, it would become an ultranationalistic muslim country, with no rights at all, all Christian and other will be exterminated, and in 10 years or before you will have a new market for you, yea a new war...

Yes, Syria is backed by Russia but it also has the support of Hezbollah, Iran and (thanks to us) Iraq. Those allies secure Syria's western and eastern borders and open the land route to Iran, via Iraq. This is not a negligible asset, which Serbia did not have, as I recall.