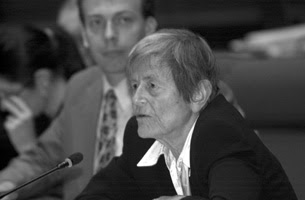 Today marks the tenth anniversary of the passing of a woman known by some as the "mother of the oceans."
She was Elisabeth Mann Borgese (right). A talented and peripatetic woman who successfully forged her own path in North American academic and intellectual circles in the middle of the twentieth century. “EMB” died on February 8, 2002, in St. Moritz, Switzerland.
The Ocean Yearbook, which Elisabeth founded, has dedicated its current issue to her and to the thirtieth anniversary of the signing of the Law of the Sea Convention. "Celebrating 30 Years of Ocean Governance under UNCLOS: Elisabeth Mann Borgese and the Ocean Governance Mission of IOI." is the title of that issue, Volume 26.
My own contribution to that forthcoming volume – an article entitled "Uncommon Heritage: Elisabeth Mann Borgese, Pacem in Maribus, the International Ocean Institute and Preparations for UNCLOS III," provides the basis for this post.
Born in Munich on April 24, 1918, in her 83 years Elisabeth claimed four different national affiliations – German, Czechoslovakian, U.S., and Canadian – and five different countries as her home – Germany, Switzerland, the United States, Italy, and Canada.
Elisabeth landed in the United States in 1938, at the age of 20, a young German woman with almost no English and no formal secondary education. Yet she ended up as a Canadian university professor.
She had studied piano performance in Zürich. She and her family had fled to that Swiss city from Hitler’s Germany in 1933 when she was fifteen. Such schooling offered little preparation either for her life in North America, which began with her parents in Princeton, New Jersey, or for the work she would initially find in her new home: first as a Research Assistant to the University of Chicago’s “Committee to Frame a World Constitution” in the 1950s, and later as the only female fellow at the Center for the Study of Democratic Institutions in Santa Barbara, California, where she moved in 1964.
In these first two positions, surrounded by male intellectuals who were shaping the U.S. academic and political landscape, Elisabeth pieced together an informal education and laid the foundation for her life’s work as an oceans activist, environmentalist, and teacher of the law of the sea.
As research assistant to the Chicago “world constitution” project, Elisabeth surveyed dozens of national constitutions, learning constitutional theory and an appreciation for different approaches to common problems of governance. Separately, she worked as a translator with Max Rheinstein of Chicago’s law faculty, who defined the discipline of comparative law in the United States. Elisabeth translated portions of Max Weber’s Economy and Law (Sociology of Law), an important chapter in Rheinstein’s foundational edition of Weber’s Economy and Society, An Outline of Interpretive Sociology. Thus early, on, Elisabeth was thinking about law as more than a normative framework and considering its potential for structuring the societal conditions for maintaining peace and distributing resources in a postwar world. Elisabeth never embraced the prospects of a world constitution and world democracy as fully as her parents’ generation. But years later, she adapted the model to structure her proposals for the smaller project of governing the world’s oceans.
While at the Center in Santa Barbara, Elisabeth began researching ocean governance in 1967, just months before the U.N. General Assembly established an ad hoc committee to study uses of the seabed beyond national jurisdiction. She helped initiate the first Pacem in Maribus convocation in 1970, the first of a series of meetings on contemporary ocean issues that continues today. 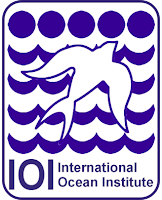 Elisabeth also helped found the International Ocean Institute in 1972. Headquartered in Malta, the Institute acquired observer status to the Third United Nations Conference on the Law of the Sea – known as UNCLOS III – in 1974. (credit for above 2001 photo of Borgese speaking on behalf of the Institute; logo credit) To this day, the Institute provides technical and legal training to oceans professionals from around the developing world. In the 1970s she also served as an adviser to the Austrian Delegation to UNCLOS III, led by Ambassador Karl Wolf.
In 1979 she began the last phase of her career: at age 62, she became a Professor of Political Science at Dalhousie University in Halifax, Nova Scotia, where she taught until her death.
EMB’s corpus of academic writings reflect a dedication to studying how the international community could better organize itself to manage the earth’s resources – terrestrial, marine and even atmospheric.
One example is her decades-long commitment to promoting ocean resources as the “common heritage of mankind.” She published The Ocean Regime in 1968, which Judge Shigeru Oda of the International Court of Justice discussed in his 2003 book Fifty Years of the Law of the Sea as the “Borgese draft.” An early proposal for establishing an international agency with responsibility for ocean resources, her draft included both the high seas and the continental shelf beyond national jurisdiction as the common heritage of mankind.
By contrast, the 1982 U.N. Convention on the Law of the Sea excludes the high seas and much of the continental shelf from the common heritage of mankind, which comprises “the Area,” in turn defined in Article 1 as “the seabed and ocean floor and subsoil thereof, beyond the limits of national jurisdiction” This is just one of numerous examples in which Elisabeth’s ideas did not make it into the Law of the Sea Convention, a fact overlooked by the surprising number of (woefully inaccurate) websites that target Elisabeth’s involvement in UNCLOS III as a reason to oppose U.S. accession to the Convention.
To the end, EMB argued for expanding the common heritage beyond seabed and subsoil resources (as international law accepts) to cover living marine resources (which it does not).

Elisabeth’s honors include: the Sasakawa Prize, awarded by the U.N. Environmental Programme; membership in the Order of Canada; and Grosse Ehrenzeichen für Verdienste um die Republik Österreich (Medal of High Merit for Service to Austria). She also wrote numerous literary works, including The Ascent of Woman (1963). And her life inspired at least one book of poetry.
EMB’s papers are housed at Dalhousie University Library Archives, which has produced an excellent online finding aid. From June through October of this year, Buddenbrookhaus in Lübeck, Germany, will host an exhibition on her life and work. " Among those who will contribute to an exhibit essay is Julie Poertner, who drew compelling connections between EMB's literary and scholarly work in a 2007 graduate thesis for Dalhousie University Schulich School of Law. Law professors contributing to the interdisciplinary volume of essays include Aldo Chircop (Dalhousie), Uwe Jenisch and Alexander Proelß (Kiel), Renate Platzöder (Munich), and yours truly.
Today Elisabeth Mann Borgese joins other women honored on IntLawGrrls' foremothers page.
by Betsy Baker at 6:10 AM