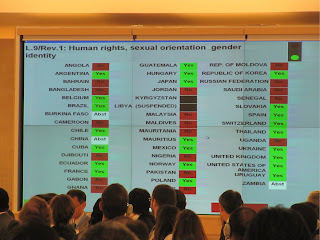 U.S. Secretary of State Hillary Clinton gave a speech at the United Nations in Geneva that placed the human rights of LGBT individuals firmly at the center of American foreign policy.
There was, predictably, a backlash.
John Nagenda, an adviser to the Ugandan President, told the BBC immediately after the speech was delivered last December:

'If the Americans think they can tell us what to do, they can go to
hell.'

There were reports that Nigeria was actually increasing its proposed penalties for same-sex relationships in response to Clinton’s speech. Labaran Maku, Information Minister of Nigeria, said:

'We reserve the right to make our laws without apologies to other countries.'

Hillary Clinton’s speech was often reported alongside earlier comments by UK Prime Minister David Cameron’s threatening to link LGBT rights and aid.
So far this sounds familiar, right? But the storyline is actually more complex.
The first UN resolution on sexual orientation and human rights was introduced in April 2003 – not by the USA or a Western European state, but by Brazil, before the then-Commission on Human Rights. E/CN.4/2003/L.92, Brazil's draft resolution, reaffirmed the universality of human rights, and called upon states to promote and protect the rights of everyone regardless of sexual orientation.
The resolution went down in flames.
The Vatican and states of the Organization of Islamic Conference strenuously opposed it and engineered the Geneva equivalent of a filibuster – introducing 55 amendments and multiple points of order. (See E/CN.4/2003/L.106-110, available here.) Although a no-action motion was rejected, a motion to postpone consideration to the following year was adopted.
At the 2004 session of the Commission on Human Rights, Brazil circulated informally a revised text that included a reference to gender identity. Under enormous political pressure, neither Brazil nor any other potential co-sponsor ever brought either resolution forward for a vote.
Following the Brazil debacle, the conventional wisdom was that a voted resolution would never succeed at the only UN body dedicated to human rights. Friendly states and activists devoted their energies instead to a series of “joint statements” in New York and Geneva.
Flash forward to the spring of last year. South Africa, which had enshrined protection against sexual orientation discrimination in its first post-apartheid constitution in 1994 but had previously been extremely reluctant to assert its voice on LGBT issues in international fora, decided to step up to the plate.
A series of hate crimes in South Africa, particularly against lesbians and trans women, had spurred civil society to campaign for a more effective government response. Domestic politics played a key part in motivating South African diplomats to introduce a new resolution on sexual orientation and gender identity in the Human Rights Council. South Africa consulted widely on the language of its draft resolution and drew inspiration from a text proposed by Latin American states that had formed the basis for a series of Organization of American States resolutions, numbered AG/RES. 2435 (XXXVIII-O/08), AG/RES. 2504 (XXXIX-O/09), AG/RES. 2600 (XL-O/10), and AG/RES. 2653 (XLI-O/11).
The resolution was introduced by South Africa and Brazil last June.

Nigeria, on behalf of the Africa Group, told South African Ambassador Jerry Matjila (right) that South Africans themselves did not support the resolution. (photos at top and at right by (photos by Sheherezade Kara/Philippe Dam) Pakistan, on behalf of the Organization of Islamic Conference, expressed concern at the attempt to introduce into the United Nations what it called “some notions that have no foundation in any international human rights instrument,” and it called for a vote. In the end the resolution – A/HRC/RES/17/19, Human rights, sexual orientation and gender identity – passed by a vote of 23 to 19. Burkina Faso, China, and Zambia abstained. Kyrgyzstan managed to be conveniently absent from the room during roll call.
The resolution requested the UN High Commissioner for Human Rights to produce a study on discriminatory laws and practices and acts of violence against individuals based on their sexual orientation and gender identity. That study, "Discriminatory Laws and Practices and Acts of Violence Against Individuals Based on their Sexual Orientation and Gender Identity," was released this past December.
The resolution also called for the Human Rights Council to convene a panel for a discussion about the results of the study. That panel will be held on 7 March, at the 19th session of the Council, and it will be chaired by South Africa.
So the campaign for LGBT human rights is not just about the United States lecturing other nations (and in fact, Hillary Clinton’s speech struck a note of mutual collaboration and respect). Nor is it about the imposition of “Western” – read European or North American – values. Often overlooked is the story of Global South activism, both on the international stage and at home; for example:
► Latin American and Caribbean activists have brought cases to the Inter-American Commission on Human Rights, and the first case of sexual orientation discrimination, Atala v. Chile, is currently pending before the Inter-American Court.
► In Fiji, Hong Kong, India and Nepal, lawyers have successfully challenged laws criminalizing same-sex sexual conduct and a similar challenge is before the Court of Appeal in Singapore.
► At a conference on sexual rights last month in Kampala (below right), Ugandans shared experiences with speakers coming from India, South Africa, Botswana and Kenya. (photo by Alli Jernow)

► And John Nagenda, the same Ugandan presidential adviser who was quoted as telling the Americans to go to hell, has spoken out against Uganda’s Anti-Homosexuality Bill.
All this calls to mind the words of the representative for Mauritius, speaking after the country voted in favor of South Africa’s resolution last June. Mauritius explained that, while it respected the position of the Africa Group, its own views on the matter were more “nuanced.”
History is always a little more complicated than headlines.
by Alli Jernow at 6:34 AM