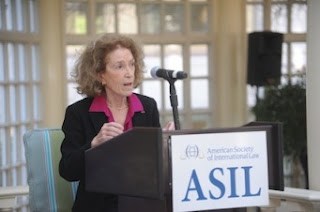 The annual Women in International Law Interest Group (WILIG) luncheon always serves both to build community and recognize the contributions of women in international law. This year's luncheon honored Mireille Delmas-Marty (left), Chair of Comparative Legal Studies and Internationalization of Law at College de France, and also featured opening remarks by U.S. Supreme Court Justice Stephen Breyer.
Professor Delmas-Marty's tremendous scholarly and public policy contributions are detailed in this year's annual program, and a full text of her remarks will be available on the Intlawgrrls blog. This ASIL Cable focuses on describing the event and reflecting upon Professor Delmas-Marty’s address, which is printed in full here.


The event began with warm welcomes from WILIG Co-Chair Kristine Anne Huskey and ASIL President David Caron. Justice Stephen Breyer then provided opening remarks that set a wonderful tone for the rest of the event through quoting Eleanor Roosevelt and explaining the critical role that law professors, and particularly Honoree Mireille Delmas-Marty, play in the work of international law. He described the "indefatigable" way in which she thinks, writes, and contributes to the web of rule of law. He said that he does not know anyone who does this better than Mireille Delmas-Marty.

Professor Delmas-Marty's analysis of the internationalization of law served as the centerpiece of this year's WILIG luncheon. She argued that we need imagination to introduce the complexity needed in international law to address diversity and resulting perplexity. She described the diversity stemming from different legal orders, multi-level governance, the many fields of international law, varying rates of legal evolution, and the wide range of key governmental and nongovernmental actors.

She then explained that diversity results in perplexity driven by disaggregation and fragmentation and two challenges that it poses. First, it poses a challenge for legal formalism: Is diversity a disruption or an irruption? Its fragmentation can lead to conflict, but its plurality can also help needed support needed evolution. Second, diversity poses a challenge of global governance: Is diversity a disease or a metamorphosis? Diversity could be a disease that weakens democracy and strengthens uncontrolled powers that act with impunity. But it could also help with law's needed evolution through a mix of hard and soft law.

Professor Delmas-Marty finally introduced the way in which imaginative introduction of complexity into the legal world could help address diversity and perplexity. She proposed an “ordered pluralism” that includes new techniques for integrating legal orders and new guidelines for sharing rulemaking and legal responsibility, with a focus on hybridization and harmonization. She noted that judges play a very important role in avoiding inappropriate extensions of power and argued for the need to organize judicial review at a global level between national and international levels, drawing from principles of complementarity and universal jurisdiction.

Professor Delmas-Marty concluded her remarks by examining the International Criminal Court's first verdict delivered 15 days ago and making two observations and one lesson. Her first observation was that complexity seems well-organized in the verdict, but that the result was also frustrating because the indictment and conviction did not cover all of the offences that accused allegedly committed. Her second observation was that complexity does not work without engagement of political realities and shared values. But she sees signs of progress and thinks that the court has a long shadow. Her lesson was to be patient but not passive. She said that we have a duty to improve legal instruments and view humanization of the law as a dynamic, interactive process. Beyond the challenge of complexity, there is an ethical challenge emerging of protecting our “common and plural humanity” that we need to meet imaginatively.

As someone who has worked on climate change and argued for more pluralist approaches in the face of international governance failures in that context, I am very sympathetic to Professor Delmas-Marty’s perspective. I think she is right that we need governance approaches that imaginatively incorporate diversity. Her remarks and examples made me interested in learning more about how she thinks the challenges of operationalizing such an approach might vary across substantive areas of international law, and when formal strategies for incorporating pluralism in new ways into international law might be most effective. I was particularly intrigued when I asked her about whether transnational agreements among subnational entities should be treated as part of pluralist international lawmaking or incorporated more directly into international law processes that she favored the latter approach. Her ideas open up many future possibilities for dialogue and for imaginative international legal work.

Following the question and discussion period, co-chairs Janie Chuang and Kristine Anne Huskey presented Professor Delmas-Marty with her award and "Prominent Women in International Law" mug. Professor Chuang then announced the election of the new co-chair Clara Brillembourg and secretary Milena Sterio, as well as new steering committee members. The event concluded as is traditional with everyone in the room introducing themselves to one another, with ASIL President David Caron in his introduction calling this lunch "the best event of the best week of the year."

(This Cable is Cross-Posted at ASIL Cables) (credit for photo by Hilary Schwab, courtesy of American Society of International Law)