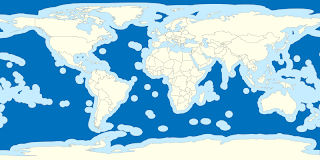 Protocol 4, Article 4: Prohibiting collective expulsion of aliens
Perhaps the most interesting portion of the decision was a question of first impression: whether Protocol 4 Article 4's prohibition on the collective expulsion of aliens applies to "push-back" (removal of aliens to a third state) carried out outside the national territory.
The court began its analysis with traditional interpretation techniques, which did not reveal much. The text of the provision contains no reference to territory. The travaux preparatoires do not speak to this specific question, but they do not preclude extra-territorial application of the provision.
Faced with this indeterminacy, the ECtHR asserted that the Convention is a "living instrument" (a good sign for those aiming to extend its protections). If interpreted narrowly, the court reasoned, Protocol 4 Article 4 would not apply to a significant component of contemporary migratory patterns.
The court also looked to other relevant case law. Noting specifically that it contradicted the U.S. Supreme Court, the ECtHR cited a decision of the Inter-American Commission on Human Rights finding that U.S. interdiction and return of Haitians violated the UN Refugee Convention and the American Declaration of the Rights and Duties of Man.
The court's analysis can be summarized in two choice quotes from paragraph 178. First, it speaks to extraterritorial jurisdiction:

Second, it dismisses the possibility of a legal "black hole":

[T]he special nature of the maritime environment cannot justify an area outside the law where individuals are covered by no legal system capable of affording them enjoyment of the rights and guarantees protected by the Convention which the States have undertaken to secure to everyone within their jurisdiction.

In other words, while states have a right to establish their own immigration policies, they must manage migratory flows with due respect to their obligations under the European Convention. In the case at hand, because Italy did not examine the applicants' individual situations, the court found that its treatment of these migrants constituted collective expulsion.

Article 13: Right of access to effective asylum procedures
The ECtHR wraps up its analysis by specifying the procedural requirements necessary where Article 3 is potentially in play. The court determines that in such cases, a member state must provide (1) independent and rigorous scrutiny of the claim to protection and (2) the possibility of suspending implementation of the removal order.
In this case, the Italian government did not provide the applicants with any access to a procedure to identify and assess their claims to protection. While Italy argued that the migrants could have applied to Italian criminal courts upon arrival in Libya, the ECtHR found this approach insufficient because it did not offer suspension of implementation of the removal order. It awarded the applicants damages of 15,000 Euros each.

Though its tone is measured, the ECtHR's approach represents a bold and important development in international human rights law. For states parties to the European Convention, the principle of non-refoulement has been extended (at least in this case) to the high seas, putting a stop to claims that ships outside member states' territorial waters are in a rights-free zone. The practical results are significant for member states, who may now be required to offer individual assessments of claims to protection before returning migrants who board national ships on the high seas. This is a powerful intrusion into states' right to protect their borders, with numerous implications for the concept of sovereignty. The ECtHR has proven itself capable of shifting strong norms in the past; here's hoping that this decision does the same.
If the court is powerful enough to strengthen the principle of non-refoulement on the high seas, states face the challenging question of how to respond to situations of mass influx by boat. While some of the resistance to processing individual applications may be attributed to xenophobia and/or other unsavory rationales, there are legitimate state concerns around the expense and difficulty of providing individualized processing to large numbers of migrants. The long-term solution, of course, is to improve conditions in migrant-sending countries. In the medium and short-term, states that are destinations for sea arrivals can and should create safe migration routes and realistic migration policies that enable migrants to escape persecution or seek employment without having to risk their lives en masse on the journey.