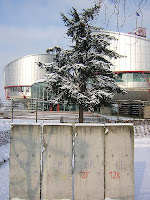 Last week I had an opportunity to re-read “The Open Architecture of European Human Rights Law”, which was published in 2008 in the Modern Law Review and which also forms part of a 2010 Oxford University Press book, Beyond Constitutionalism: The Pluralist Structure of Postnational Law. Both the article and the book were written by Nico Krisch, a Professor of International Law at the Hertie School of Governance in Berlin, Germany, who is currently Visiting Professor of Law and John Harvey Gregory Lecturer on World Organization at Harvard Law School.
The occasion for my re-reading was the research group called “Interfaces” which I belong to at the Amsterdam Center for International Law.
Built in part on the International Law in Domestic Courts project, the group will study this year the development of international law through its interactions with national law and national court decisions. It is led by André Nollkaemper, Professor of Public International Law and Vice-Dean for Research at the Faculty of Law of the University of Amsterdam. It is comprised of five researchers, Rosanne van Alebeek, Yvonne M. Donders, Hege Elisabeth Kjos, James H. Mathis, and myself, Machiko Kanetake. The group is further supported by two researchers, Elaine Fahey and Ingo Venzke, who represent a bridge between this group and another project, on The Architecture of Postnational Rule-Making. (Incidentally, Ingo published a review of Krisch’s book here.)

The research group holds periodic meetings for review of literature and draft papers throughout this year. Last week, we picked up the 2008 article by Krisch (left) as one of materials for group discussion. Both the article and the 2010 book have been widely read already. Yet they remain on the reading list for the study of interactions among different normative layers for global governance, including those between national and international law. From the re-reading of Krisch’s insightful article, together with his book, I wish to briefly note the following two points.

Constitutionalism and pluralism paradigms – why contrasted?
As suggested by the 2010 book title, Krisch presents constitutionalism and pluralism as contrasting paradigms for the postnational legal order which transcends the divide between national and international law.
► Postnational constitutionalism embodies “continuity with the domestic constitutionalist tradition” in that it construes an “overarching legal framework that determines the relationships of the different levels of law and the distribution of powers among their institutions” (p. 23).
► Pluralism, in contrast, rejects the practical feasibility and normative desirability of the overarching legal framework, and emphasizes the “heterarchical interaction of the various layers of law” (p.23). Pluralism is here used not merely as a matter of multiplicity or diversity, but as the absence of clear-cut hierarchy. As the title of the book articulates, Krisch makes a case for pluralism.
While the contrast of these two paradigms is no doubt illuminating, one may also find it difficult to situate it within the existing international legal scholarship.


From whose point of view is European human rights law regime pluralistic?
With the constitutionalism-pluralism paradigm in mind, Krisch explores the European human rights law regime in the aforementioned 2008 article. Krisch argues that despite the constitutional narratives often employed to account for European human rights law, the regime is featured by its pluralist structure, which:
► On the one hand, preserves the claim of ultimate authority on the part of national authorities to decide on the conflicts between national-international human rights law, and
► On the other hand, achieves mutual accommodation and harmonization between domestic courts and the European Court of Human Rights through judicial interpretation. (credit for above right photo of court's building in Strasbourg, France, with a fragment from the torn-down Berlin Wall in foreground) The subtle inter-order tensions that a pluralistic structure preserves help to encourage interpretive harmonization.
The re-reading of his article has inspired me to consider the following question: from whose point of view is the European human rights law regime pluralistic? As described below, three different points of view – those of domestic courts, of international courts, and of scholars – provide different answers as to whether national-law-and-international law interactions are considered pluralistic.
► Domestic courts: First, domestic courts are often constitutionalist when they decide on who retains the ultimate authority.
As examined in Krisch’s article, domestic courts at least claim to have the final say as to the relationships between national law and the Strasbourg jurisprudence. This would mean that in the view of the domestic courts, there is hierarchy. Yet they do not see a clear-cut hierarchy when it comes to the more substantive interpretation of human rights law. National courts exercise their interpretive discretion to accommodate conflicts and show respect for the European Court of Human Rights' jurisprudence as a matter of the substance of law.
► International courts: The hierarchy also exists in the views of the European Court of Human Rights, which reinforces a constitutional vision in its jurisprudence.
Yet the regional human rights court also engages in interpretive accommodation, as argued in Krisch’s article. The court has been trying to avoid conflicts with national law by adopting some techniques, such as the margin of appreciation, to avoid conflicts with national law, and contribute to the maintenance of harmonious relationships. (Among many IntLawGrrls items about this doctrine is this post by Collège de France Professor Mireille Delmas-Marty.)
► Scholars, who perceive the relationships from a distance: While national and international courts may be constitutionalist at least in certain contexts, the European human rights law can be best understood as pluralist when seen from a distance.
There are no overarching legal rules to determine whether the constitutionalist claims made by national or international courts are valid, or to settle specific conflicts between national and international human rights law. The pluralist structure may hold true in most areas of international law which has no centralized authority or supranational global law to resolve inter-order tensions.
These points from the re-reading of Krisch will be part of the discussion of the research group “Interfaces” this year. It would be particularly interesting to study how the differences in the views of national and international courts about the inter-order hierarchical relations, and the tensions created by those differences, affect the development of international law and wider transnational norms.
by Machiko Kanetake at 6:00 AM