CSW 56: Rural Women and the Limits of Law 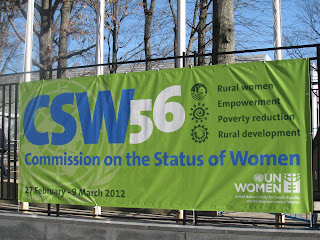 The United Nations' 56th Session of the Commission on the Status of Women featured as its priority theme this year “the empowerment of rural women and their role in poverty and hunger eradication, development and current challenges.”
This focus on rural women is long overdue, given that rural women comprise a quarter of the world’s population. Further, women provide 43% of the world’s agricultural labor, and they produce half of the world’s food for direct consumption. In fact, non-governmental organizations discovered some time ago that women—whom many refer to as the “architects of food security”—are key agents of development. One reason for this is that when women and girls receive income, they reinvest 90% of it in their families. In spite of their transformative potential to reduce hunger and poverty, women own less than 2% of land worldwide and they receive less than 10% of available credit.
As one whose scholarship focuses on rural livelihoods in both the United States and abroad, I was pleased to attend three days of the two-week CSW 56 event (February 27-March 9) as an observer for the American Society of International Law. (Lauren McIntosh wrote about the opening of CSW 56 in a prior IntLawGrrls post.)
As a former gender consultant for the United Nations, I was prepared for some of what I saw (e.g., bureaucracy), but the experience also held a few surprises.
► One thing that intrigued me about the “Session”—which is not a session at all but a dizzying array of “high-level round tables” and other meetings, panel discussions, “side events,” and “parallel events”—is that discussion of law was relatively absent.
► Fu

'Face reality ... be honest. Even in America, who tells the law? Maybe [the victims and their families] are illiterate ... [child marriage] is their custom. Who goes to tell the law except the child? And how can the child go tell the law?
'This is where all of us come in ... if your NGO is interested in solving these problems. You go [to the village], watch the ways things are done and then talk to the educated locals [so that they begin to see the social and economic costs of the practice, e.g., child marriage]. And they will know they must do something.'

This woman, like many others I heard over three days, extolled the importance of grassroots efforts to achieve the desired empowerment of women.
Wherever one might strike the balance between formal law on the one hand and local, grassroots efforts to educate and achieve cultural change on the other, few coming out of CSW 56 would dispute that both have significant roles in achieving the empowerment of not only rural women, but indeed all women.

Expecting the Commission on the Status of Women to produce focused statements on very specific matters affecting women's enjoyment of their human rights is an exercise in futility. The Commission's role is to provide overviews of policy issues relating to women that the UN should address. Members of the CSW delegations are representatives of states, frequently with ambassadorial rank, and cannot be expected to say anything beyond generalities and refrain from commitments.

Moreover, the split between rights-based and development-based policy thinking in the UN is endemic. For targeted work on the rights of rural women one must look to CEDAW. The CEDAW Committee of course understands the limits of law but as a group of independent experts pushes states to implement and requires them to report on whether they have done so.

The invisibility of the US in the sphere of CEDAW is of course an international embarrassment, but Americans should not absent themselves from the women's human rights discourse on that account. The US remains accountable under UDHR and the Special Procedures such as the Special Rapporteur on Violence against Women (and any others that could touch on discrimination against women under their mandate), as well as ICCPR, CERD, and CAT. We also are subject to the Universal Periodic Review. All of these offer opportunities for advocacy at the UN as well as providing substantive content for domestic advocacy.

I also note for the record that the new CEDAW Commentary is out from OUP--a complete account of the Committee's application of the Convention through 2010.