(My thanks for the opportunity to contribute this introductory post, which responds to a previously published IntLawGrrls post)

Earlier this month, an IntLawGrrls post by Leiden Law Professor Larissa van den Herik revisited the legal definition of genocide. The post implies that genocides committed through policies of socio-economic deprivation were not originally envisaged by the drafters of the 1948 Convention on the Prevention and Punishment of the Crime of Genocide. 'Openness towards new modes of committing genocide,' Larissa wrote, would 'open the door for using genocide as a narrative for violations of socio-economic rights'.
I would like to advance a different position.
I argue in this post that even the narrow and traditional interpretation of genocide (limited to 'physical or biological destruction') covers at least some violations of socio-economic rights.
Socio-economic or cultural rights abuses are part of the law on genocide even if one does not agree with the Partial Dissenting Opinion by Judge Mohamed Shahabuddeen in the Krstić Appeal Judgement, on which the earlier post relies, or with the sporadic cases in which a more expansive view of the definition has been upheld.

Socio-economic rights and early precedents
As that post rightly notes, the legal definition of genocide is in a way the legal narrative of the Holocaust. It is, however, striking that it is often assumed that the genocide definition would somehow exclude considerations of socio-economic abuses because the definition was tailored on past events. From a historical perspective, this is a surprising supposition.
Abuses of socio-economic rights have always been part of the thinking on genocide. For Raphaël Lemkin (above right), the driving force behind the Genocide Convention, the relationship between abusive socio-economic and cultural policies and the definition of genocide was even primordial to the term he coined. (credit for 1947 photo of Lemkin, courtesy of United Nations) 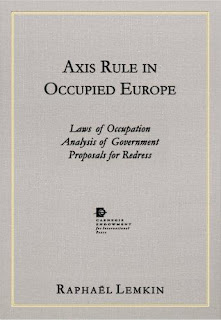 In Axis Rule in Occupied Europe (1944), Lemkin analysed the decrees penalising the use of the Polish language and promoting the destruction of cultural monuments and treasures, the distribution of food on racial grounds, the use of Poles for slave labour, and the settlement of Germans on Polish land. (image credit) He felt strongly that these measures were taken out of a desire to destroy essential foundations of the life of Poles, Jews, or Czechs:
► The very first example of genocidal conduct Lemkin mentions is ‘racial discrimination in feeding.’
► He continues with ‘endangering of health’ by depriving groups of ‘elemental necessities for preserving health and life. This latter method consists, for example, of requisitioning warm clothing and blankets in the winter and withholding firewood and medicine’.
► Only after that does Lemkin mention direct mass killings.
Arthur Greiser, the very first individual convicted according to the principles underpinning the IMT Charter, was found guilty of ‘genocidal repression’. The Greiser trial report, compiled by the UN War Crimes Commission, reads like a disturbing catalogue of abuses that can today be conceptualised as violations of socio-economic and cultural rights.

What does ‘destroy’ mean?
It is true that not everything that Lemkin had in mind found its way into the positive law of the Convention.
Most notably, Lemkin lost the fight to include sub-categories of what the Secretariat Draft of the Genocide Convention called 'cultural genocide'. Based on this omission, legal scholars and tribunals often repeat that only 'physical' and 'biological' genocide are covered, while 'cultural genocide' and 'ethnic cleansing' were intentionally excluded by the drafters.
It is, however, an unwarranted shortcut to conclude from this drafting history that the existing definition of genocide would exclude all violations of socio-economic or cultural rights.
As Larissa notes in her post, the crux is the word 'destroy' in the chapeau of the definition.
My findings, set forth in my research project entitled Violations of Economic, Social and Cultural Rights as International and Transnational Crimes, suggest that (with the exception of transferring children), de lege lata, the verb 'destroy' should indeed be understood as limited to the 'physical or biological' destruction of the members of the group, rather than the dissolution of the group as a social or cultural community. This is where, for better or worse, the currently accepted legal definition of genocide is narrower than Lemkin’s original notion of the term.
However, genocidal intent is present when perpetrators intend to wipe out the existence of the group whether in gas chambers or by denying them access to subsistence rights.
Importantly, genocidal intent covers slow and indirect victimisation that certainly includes denying access to socio-economic rights. As Trial Chamber I of the International Criminal Tribunal for Rwanda explained in paragraph 505 of its judgment in Prosecutor v. Akayesu (September 2, 1998),

'methods of destruction by which the perpetrator does not immediately kill the members of the group, but which, ultimately, seek their physical destruction'

may constitute genocidal acts, and may consequently attract genocidal intent.
In addition, all five prohibited acts listed in the genocide definition can be committed by way of violating socio-economic rights, in particular the deliberate infliction of conditions calculated to bring about the physical destruction of the group.

The inadequate treatment of economic, social, and cultural rights in international criminal justice
This debate is important.
The destruction of homes, the cutting off of water sources, the exclusion of certain groups from education or cultural life, or the forcing of people to work under inhumane conditions has been commonplace throughout history. Rarely, however, have such violations been addressed through legal processes. Indeed, international criminal lawyers have generally assumed that international crimes are confined to certain violations of civil and political rights, to the exclusion of their socio-economic and cultural counterparts. 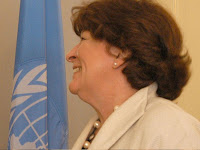 However, many researchers and practitioners have recognised that the marginalisation of socio-economic and cultural considerations is difficult to justify ethically and judicially. In a 2006 speech, delivered while she was UN High Commissioner for Human Rights, Louise Arbour (right) (photo credit), for instance, argued that by exposing violations of economic, social and cultural rights, transitional justice is

'poised to make the significant leap that would allow justice, in its full sense, to contribute as it should to societies in transition'.

Whether and to what extent the existing definitions of international and transnational crimes overlap with violations of economic, social and cultural rights is the topic of my current research project, described here. And in 'War Crimes Related to Violations of Economic, Social and Cultural Rights', published last year in the Heidelberg Journal of International Law, I have outlined some of my findings on the overlap between existing definitions of war crimes and socio-economic and cultural rights abuses.
by Evelyne Schmid at 6:00 AM

Very interesting Evelyne, as all of your writings. I think however that in the international criminal law spectrum the difficulty in attaching economic or cultural rights to the definition arise at the moment of the proof of the mens rea element of the intent. For instance, while serious, denying access to education to a given ethnic group might not lead to its destruction. While I recognise the overlap the claim in practice would face considerable challenges at a court. Do you think this can be overcome with a different conceptualisation of 'destruction', or by a tuning the interesting new framework that you propose?

Dear Deborah, Thank you for your comment. Indeed, the mens rea is the crux. I mention the right to education as one of the socio-economic issues international criminal lawyers have tended to overlook even if such abuses are a common feature of conduct that falls within the ambit of international criminal law. But crimes other than genocide (e.g. persecution, forcible transfers or apartheid as crimes against humanity; or war crimes in relation to the destruction of educational buildings) seem more pertinent in relation to education.

Concerning the chapeau mens rea for genocide, my point was that intent of 'physical or biological destruction' can indeed be related to socio-economic abuses because it does not legally matter whether perpetrators intend to wipe out the group immediately by shooting them, or if perpetrators intend to destroy the group by depriving them of access to drinking water or leave victims in the cold after destroying their housing. I agree: it would be hard to see how denials of education would ever suffice in that regard. But that doesn’t mean education is completely irrelevant in relation to genocide. Discriminatory denials of education could be of evidentiary relevance to infer genocidal intent. This is in line with what Krstic has recognized in relation to the destruction of cultural symbols.

The blog post focused on the mens rea in the chapeau. Other socioeconomic rights abuses (as you point out, not necessarily education) could also constitute the actus reus of genocide. The links between the actus reus and socioeconomic abuses are quite straightforward with the right to food, for instance, where extreme violations could constitute one of the underlying acts (a, b, c or even d). There too, that conduct alone would not be enough for proving ‘intent to destroy’ (see Blagojevic), but the same problem arises if the underlying act is committed with killings by firearms.

I would be curious as to your (or other readers') prognostications of whether this would convince tribunals! I agree that evidentiary challenges are significant: they always are with genocide. And as you imply, just because something is difficult to prove, it doesn’t case to be a crime.