Delighted to announce that the Honorable Joan E. Donoghue (below right), who has served since 2010 as a Judge on the Hague-based International Court of Justice, soon will deliver the 108th Sibley Lecture here at the the University of Georgia School of Law in Athens.
Donoghue will speak on "The Role of the World Court Today" at 3:30 p.m. Tuesday, April 3, in the law school's Hatton Lovejoy Courtroom. She'll address the continuing role of the ICJ in light of changes in international law since the court was founded as the principal judicial arm of the United Nations in 1945. 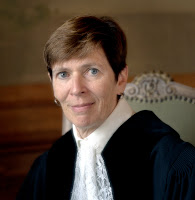 Rights at the End of the Twentieth Century" in 1994; and Israeli Supreme Court Justice Dalia Dorner, who asked "Does Israel Have a Constitution?" in 1999.
by Diane Marie Amann at 6:30 AM