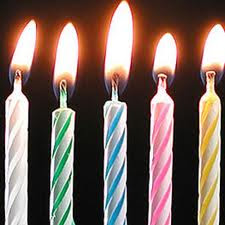 Today we IntLawGrrls celebrate our 5th birthday.
On this day in 2007 we launched this blog.
Once again, on this 'Grrls Day we've much cause to celebrate!
We:
► Began 2012 with a makeover.
► Featured many new IntLawGrrls contributors, among them Fatou Bensouda, who contributed the speech she gave to the to the Assembly of States Parties on the occasion of her December 12, 2011, election as Prosecutor of the International Criminal Court. As listed in full on our contributors page and depicted below, writing our more than 5,300 posts to date have been more than 250 women from dozens of countries.
► Welcomed a few new IntLawChildren to our world.
► Published "Women and International Criminal Law," a special issue of the International Criminal Law Review that featured essays written in honor Judge Patricia M. Wald, herself an IntLawGrrls contributor. Among the authors were U.S. Supreme Court Justice Ruth Bader Ginsburg and Harvard Law Dean Martha Minow. (Some synopses of essays, many of which were presented at a 2010 roundtable held at the American Society of International Law, were posted on this blog.)
► Cosponsored the International Humanitarian Law Dialogs at Chautauqua, New York, for the 3d year in a row, and assumed responsibility for that conference's annual Katherine B. Fite Lecture. 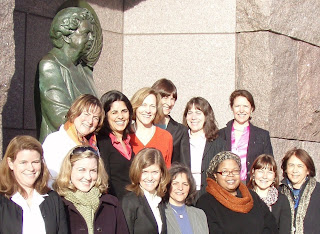 ► Gathered for a photo 'round the statue of Eleanor Roosevelt for a photo (left) made during the 2011 ASIL annual meeting. We continue to draw inspiration from ER and scores of other transnational foremothers.
► Also at the 2011 ASIL meeting, applauded IntLawGrrls contributors – Gay McDougall as she won the Goler T. Butcher Medal, and Lucy Reed as she received the Prominent Woman in International Law award during the WILIG luncheon. We're honored that later this month the 2012 award will go to another of our distinguished contributors, Collège de France Professor Mireille Delmas-Marty.
► Moved to new positions (here, here, here, here, and here), and continued to speak at conferences, to publish, to teach, and otherwise to make heard our voices on international law, policy, practice.
► Watched our readership continue to grow along with us. Last year we were consistently ranked among the fastest-growing and most-read law prof blogs. We've reached nearly 30,000 cities around the world, and have welcomed more than 1.059 million page views since our founding.
To our contributors and readers alike, heartfelt thanks, and best wishes for another wonderful year!