It's our great pleasure to welcome Angela Duger (left) as an IntLawGrrls contributor.
Angela's the Ford Foundation Fellow at the Program on Human Rights and the Global Economy (PHRGE) at Northeastern University School of Law. In this position, she conducts research and writing for the program’s domestic and international human rights projects and programming. Angela was also a facilitator of the 2011 PHRGE Institute “Framing Economic, Social and Cultural Rights for Advocacy and Mobilization: Towards a Strategic Agenda in the United States” conference.
Angela received her Juris Doctor from Northeastern University School of Law in 2011. During law school, Angela completed legal internships at the François Xavier Bagnoud Center for Health and Human Rights and Harvard School of Public Health as well as at a law firm in Lao PDR where she worked on a humanitarian law project for the International Federation of Red Cross and Red Crescent Societies. Angela has also served as a teaching assistant for IntLawGrrl Hope Lewis’s human rights seminar on race, gender and culture at Northeastern University School of Law as well as for Gillian MacNaughton’s class on human rights for policy and practice at 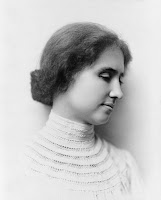 the Heller School for Social Policy and Management at Brandeis University.
Angela is interested in human rights and its application to international development, as exemplified in her post today on last Tuesday's report by the Special Rapporteur on the Right to Food.
Angela dedicates her post to Helen Keller (pictured right), about whom she writes:

I admire Helen Keller for her courage and uncompromising dedication to social causes including women's rights.

She also notes that Helen was a founder of the American Civil Liberties Union. Today Helen Keller, about whom we've previously posted here, joins others so honored at IntLawGrrls' foremothers page.
by Jaya Ramji-Nogales at 7:44 AM