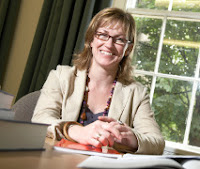 It's our great pleasure to introduce Clare McGlynn (right) as an IntLawGrrls contributor.
Clare's a Professor at Durham Law School in England, whose faculty she joined in 1999. She co-founded the research group GLAD – Gender & Law at Durham – in 2007. From 2007 to 2009, she was Deputy Head of the law school. At Durham, she serves as an advisory board member for the Centre for Criminal Law and Criminal Justice, as a member of the Durham European Law Institute, and as a member of the Human Rights Centre.
Before entering legal academia, she'd practiced law as a solicitor.
A feminist legal scholar, Clare has particular expertise in the fields of rape law and policy, the legal regulation of pornography, and the representation of women in the legal profession. Her research currently is supported by a Leverhulme Research Fellowship. In 2007, she co-organised a seminar on extreme pornography that drew media attention. Her work has been discussed in the Scottish Parliament, the Guardian and 2010 Home Office review of the Sexualisation of Young People.
Along with her Durham Law colleague Erika Rackley and Rosemary Hunter of England's Kent Law School, Clare co-leads the Feminist Judgments Project, "which put 'theory into practice' by writing the 'missing' feminist judgments in key cases," then published them in Feminist Judgments: From Theory to Practice (2010).
The project that forms the basis of Clare's introductory post below evolved out of a 2008 conference funded by the British Academy. Entitled "Rethinking Rape Law," it included presentations by Catharine MacKinnon, Michigan Law Professor and Gender Advisor at the International Criminal Court, and Navanethem Pillay, U.N. High Commissioner for Human Rights. Clare's post describes the product of this conference, an essay collection entitled Rethinking R 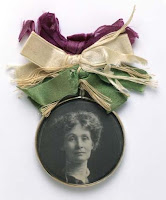 ape Law: International and Comparative Perspectives (2010), which she co-edited with Nottingham Law Professor Vanessa Munro.
Clare dedicates her post to dedicates to Emmeline Pankhurst (1858-1928), a militant British suffragist and rights activist about whom we've frequently posted. (credit for photo of Pankhurst in 1909 "portrait badge") Clare joins contributor Sue Westwood in honoring Pankhurst as an IntLawGrrls foremother.
Heartfelt welcome!
by Diane Marie Amann at 6:16 AM