No justice cascade in Spain

The Spanish case dismissing charges against Investigative Judge Baltasar Garzón but upholding its 1977 Amnesty Law demonstrates a cruel double standard in Spain’s approach to crimes against humanity.
As I explained in yesterday's post, while Spain exercises jurisdiction for similar crimes committed in other countries and disregards other national amnesty laws, it refuses to do the same at home.
The victims in Spain of the country's former dictator, General Francisco Franco (right), appear to have fewer rights than victims of oppressive regimes abroad. (credit for 1969 photo)
Spanish law allows for the exercise of universal jurisdiction prosecutions of non-Spanish citizens for crimes, including crimes against humanity, committed outside Spain. (IntLawGrrl Carmen Márquez Carrasco's post on this law is here.)
The Appeals Chamber of the Spanish Audiencia Nacional confirmed jurisdiction over cases arising out of South American dictatorships, finding that domestic amnesties could not bind Spanish courts. Moreover, as IntLawGrrl has Naomi Roht-Arriaza has written, the Court interpreted international law broadly—in stark contrast to the Supreme Court’s decision.
Garzón is perhaps most famous in international law circles for his case against former Chilean Dictator, Augusto Pinochet (described by Naomi in a previous post). Garzón’s investigations of Pinochet and others (such as the trial of Adolfo Scilingo) have been credited as a major catalyst in the “justice cascade” leading to greater accountability in South America.
However, the cascade has not caught on in Spain.
In a recent decision on the legality of investigations into Franco-era crimes, the Spanish Supreme Court engaged in a lengthy and outdated discussion of transitional justice in Spain that ignores recent jurisprudence in international forums (e.g., the European Court of Human Rights (here) and the Inter-American Court of Human Rights (here)) and in foreign forums (e.g., Argentina (here) and Uruguay (here) jurisprudence. This discussion, which claimed Spain was a “model” of transitional justice, highlights the sad fact that generations later, Spain has not recovered from the Franco dictatorship or completely reconciled. It raises questions about the value of emphasizing peace over justice, and the possibility for future accountability in Spain.
The 1977 amnesty prohibits investigation into crimes committed before 1976. The UN Human Rights Committee called for Spain to repeal the amnesty in 2008 and comply with its obligations under the International Covenant for Civil and Political Rights.
This had no influence on the Court, which claimed that this and other similar requests were simply that: requests, and not charges of non-compliance with treaty obligations. Therefore, there was no duty to follow them.
The Court heralded the amnesty as an important and historic tool for the reconciliation of different Spanish political groups, necessary for the peaceful transition from the Franco regime.

The Court claimed the law “constituted an essential pillar, irreplaceable and necessary to overcome the Franco regime and what this involved” and was promulgated with the “total consent of the political powers.”
The judges claimed that “in no case was it a law passed by the victors, those who remained in power, to cover up their own crimes,” neglecting to mention that Franco’s successors remained in power, in politics and the military, after his death and at least until the 1978 Constitution was passed. In fact, one of Franco’s ministers created the currently governing Partido Popular, one of two main political parties in Spain. He remained very active in Spanish politics until September 2011, when he announced his retirement.
The judges also proclaimed that they could never question the legitimacy of the amnesty process:


'Precisely, because the "transition" was the will of the Spanish people, articulated in a law, […] no judge or tribunal, in any way, can question the legitimacy of that process.' 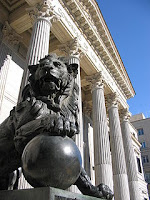 It is only for the Parliament to decide to derogate from this law, they stated. The judges have thus clearly negated the role of the courts in determining the legality or constitutionality of laws as a general concept of a functioning democracy. (credit for photo at left of the lower house of Spain's legislature)
This discussion of the amnesty law merely parrots the government’s standard position. The decision disregards key issues in the historical record.
Madrid-based political scientist Paloma Aguilar has noted that the elements of the amnesty law that would apply to Franco elites went largely unnoticed in the parliamentary debate and media at the time. No one publicly defended the two paragraphs applying amnesty to Franco’s political elites—the most heavily debated aspect of the law, and one of its main objectives, was to free prisoners from the ETA terrorist group.
It is disingenuous of a supposedly objective court to so heavily praise the amnesty, as it relates to Franco-era crimes, as a reflection of the will of the Spanish people.
Although amnesties can be useful tools for peaceful transition, their continued application after over thirty years of peace should be critically questioned. In this case, the avoidance of investigating the Franco-era crimes is essentially one-sided, and no longer seems to represent the “clear and visible” will of the Spanish people.
In fact, the “will of the people,” now seems to favor accountability. A recent empirical study on Spaniards’ attitudes towards different transitional justice mechanisms found that nearly twice as many Spaniards wanted trials for Franco-era politicians than those who did not. The study concludes that the Spanish people are supportive of investigating the truth and having accountability for its past through transitional justice mechanisms.
What does this decision mean for the future of Spain?
Has there truly been reconciliation in Spain?
Victims greeted the decision with relief and anger, applauding the dismissal of Garzón’s charges but denouncing the Court’s treatment of the crimes. With victims and witnesses in their nineties, there are limited opportunities for their voices to be heard before a court. It now seems less likely than ever that they will have that opportunity. This is unjust for the victims of his brutal repression and is a sharp divergence from the increasingly accepted idea that it is possible to have both justice and peace following transition.
There may be some alternatives, however unlikely:

► The Spanish Parliament could repeal the amnesty.
► A case could be filed before the European human rights court, arguing that the Supreme Court’s interpretation was incompatible with human rights obligations.
► Or, in an ironic twist of fate, accountability for Franco’s victims could potentially come from abroad, through a universal jurisdiction case.
by Jennifer Easterday at 11:43 AM

Thank you for this very interesting posting. I agree with the sense of disappointment about transitional justice in Spain, a State that otherwise has been quite proactive on universal jurisdiction and support for the ICC.

When comparing with the broader historical trend though, one should take into account the obvious fact that FRANCO's gravest crimes were committed in the 1930s and 1940s, and the transition started only in 1975. So the historical period and time lapse is very different compared to the experiences of Latinamerica and others. The human rights culture and political has evolved enormously, so that many people of my parents generation accepted "el paseillo" (euphemism for summary executions) as a fatal unavoidable consequence of the war, while of course for most Spaniards today this is simply an unacceptable crime. Most perpetrators simply are dead.

A more appropriate comparision could be drawn with the State crimes committed in the 1980s with the counter-terrorism death squads. Some criminal cases were brought forward succesfully, including by judge Garzon, but I fear most crimes of this kind have not been prosecuted, least of all concerning the higuest level of authority. Somebody should research this carefully.

On the other hand may be Garzon and other judges could have challenged the ammnesty law before the Constitutional Court, which seems to me a more appropriate course of action rather that trying an expansive interpretation of criminal law. I would be interested on your views about this.

I have not had time to study these issues in detail, these are just some random thoughts in my personal capacity.

Thanks and best regards,
Xabier