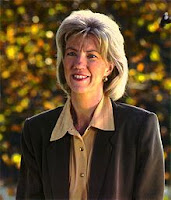 On this day in ...
...1954, Gale Norton (right) was born in Wichita, Kansas. (photo credit) She earned her bachelor's and law degrees from the University of Colorado, and practiced at the U.S. Department of Interior and worked at the Mountain States Legal Foundation. She then was elected Attorney General of Colorado, a position she held from 1991 to 1999. In 2001, upon nomination by President George W. Bush, Norton became Secretary of the Interior -- the only woman ever to hold that U.S. Cabinet position. Amid an ethics inquiry, Norton resigned that post in 2006. Subsequently she went to work for Royal Dutch Shell; a consequent inquiry into her ties to that company did not result in charges.