On this day in ...
... 1947 (65 years ago today), amid concerns that Greece and Turkey were succumbing to Soviet influence, U.S. President Harry S. Truman described "a new foreign policy for the United States," as The New York Times called it. Specifically, Truman 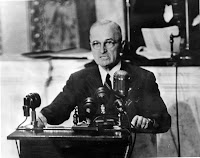 'proposed that this country intervene wherever necessary throughout the world to prevent the subjection of free peoples to Communist-inspired totalitarian regimes at the expense of their national integrity and importance.'

The message, delivered in the speech before Congress depicted at right, included a request for $400 million to aid the beleaguered countries. (photo credit) This policy of "containment" became known as the Truman Doctrine.
(Prior March 12 posts are here, here, here, here, and here.)
by Diane Marie Amann at 3:04 AM