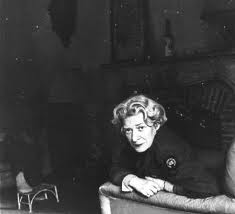 On this day in ...
... 1892 (120 years ago today), Janet Flanner was born into a mortician's family in Indianapolis, Indiana. She studied 2 years at the University of Chicago, then worked as a film critic at her hometown paper. Divorced from William Rehm after a few years of marriage, she had a reportedly lifelong, though not exclusive, relationship with another writer, Solita Solano. Flanner is best-known as The New Yorker's Paris correspondent, writing under the pseudonym "Genêt" from 1925 to 1975. As posted in our Women at Nuremberg series, Flanner covered the post-World War II trials at Nuremberg. (credit for 1944 photo of Flanner in war correspondent's uniform) A member of the American expat artistic community that included Gertrude Stein, Ernest Hemingway, and others, she died in New York in 1978. Some of her writings are available here.
(Prior March 13 posts are here, here, here, here, and here.)
by Diane Marie Amann at 3:04 AM