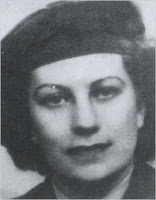 On this day in ...
... 1921, Eileen Nearne (right) was born in London to a family with English, French, and Spanish ancestry. (photo credit) They lived in France, where she grew up, until shortly before the Germany occupied that country during World War II. The family fled, arrived in England, and she, a sister, and a brother eventually joined Britain's spy network, the Special Operations Executive. (On other women who served in the S.O.E., see here and here.) Nearne parachuted into France and worked for the Allies in the occupied land, sending messages back via secret radio. Eluding capture until mid-1944, she was then arrested, endured torture, and detained at Ravensbrück and other concentation camps. She escaped, only to have American troops suspect she was a Nazi spy, until Britain informed them otherwise. Nearne died at age 89 on September 2, 2010.