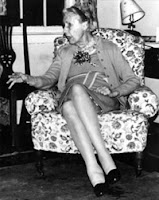 ... 1976, Dr. Eleanor Bontecou (right) died at age 85 in Washington, D.C. (photo credit) A top member of the Bryn Mawr College Class of 1913, Bontecou had been a student of Felix Frankfurter at Harvard Law and in 1928 had earned her Ph.D. from what's now known as the Brookings Institute. A career as a law professor at the University of Chicago was cut short when she contracted sleeping sickness and was rendered bed-ridden in the 1930s. But by 1943 she was better, and embarked on a distinguished governmental career, including service in the Civil Rights Section of the Criminal Division of the Department of Justice and in the War Department. In the latter, she inspected post-World War II proceedings at Nuremberg (thus making her the newest addition to our Women at Nuremberg series), and further helped to prepare war crimes cases to be tried in Tokyo by the International Military Tribunal for the Far East. On retirement she aided persons harmed by the anti-Communist fever of the McCarthy era. Three years before her death, Bontecou gave an oral history interview to the Truman Library, which also houses Bontecou's papers.