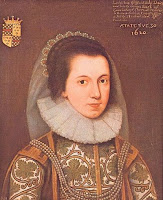 On this day in ...
... 1676, Lady Anne Clifford (left), who held the titles of 14th Baroness de Clifford and hereditary High Sheriff of Westmorland, died, 86 years after her birth in Yorkshire, England. (portrait credit) As a child she was a favorite of Queen Elizabeth I. As an adult, she became known for a lifelong quest to secure an inheritance that eluded her on account of her sex. She described her pursuit, writing "hundreds of pages of diaries which document her life while constantly relating it back to what had gone before, placing her in a historical continuum." In addition to being known as a writer, she was a patron of other authors, and so is featured in "Shakespeare's Sisters: Voices of English and European Women Writers, 1500-1700," a current exhibition at the Folger Library in Washington, D.C., which The New York Times reviewed here.
(Prior March 22 posts are here, here, here, here, and here.)
by Diane Marie Amann at 3:04 AM