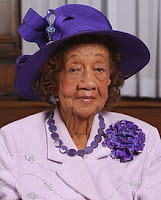 On this day in ...
... 1912 (100 years ago today), Dorothy Irene Height (left) was born in Richmond, Virginia. Growing up near Pittsburgh, the African-American girl went to schools that were integrated as a matter of form, yet where discrimination lingered. An example:

'As a high school senior and the valedictorian, she won a national oratorical contest, and with it a $1,000 college scholarship. But the college of her choice, Barnard in New York, had already admitted its quota of black students – two.'

Height went instead to New York University, and within 4 years had earned both bachelor's and master's degrees. While a caseworker for the city's welfare department, she became active in the civil rights movement, joined the staff of the YWCA, and eventually became President of the Negro Council of Women, a position she held for 4 decades. Projects included lobbying figures like 1st Lady Eleanor Roosevelt and President Dwight Eisenhower, voter registration drives, education funds for students in the movement, assistance at Freedom Schools in Mississippi, development projects for poor people in that state as well as in countries in Africa, and alliances with feminist groups. Height, who was awarded inter alia the Presidential Medal of Freedom and the Congressional Gold Medal, died in Washington, D.C., in 2010, at age 98.