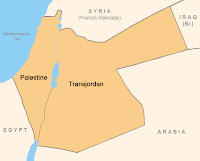 ... 1925, the Permanent Court of International Justice delivered its judgment in the Mavrommatis Jerusalem Concessions Case (Greece v. Britain). Greece had complained that upon acquiring the mandate in Palestine (right), Britain wrongfully was refusing to honor certain public works concessions that in 1914 had been granted a Greek national by the previous ruling entity, the Ottoman Empire. (map credit) The court sustained the espousal by Greece of its national's claim and further ruled in favor of Greece on the merits; however, it denied the Greek request for indemnity, on the ground that no harm to the Greek national had been proved.
(Prior March 26 posts are here, here, here, here, and here.)
by Diane Marie Amann at 3:00 AM