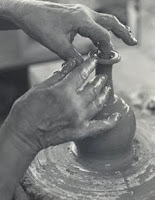 On this day in ...
... 1893, Beatrice Wood was born into wealth in San Francisco, California. She persuaded her reluctant parents to send her to Paris to study acting and visual arts. When World War I broke out she moved to New York, where she performed with a French theater troupe. She worked with Marcel Duchamp and others to create a Dadaist magazine in New York; perhaps inevitably, she was nicknamed the "Mama of Dada." Eventually "Beato," as she was also called, concentrated her creative endeavors on ceramics and pottery, for which she is best known today. (credit for undated photo of Wood's hands, courtesy of the Beatrice Wood Center for the Arts) In 1985, she published an autobiography, I Shock Myself. Wood died in Ojai, California, in 1998, just short of her 105th birthday. Asked what was the key to her long life, she once replied:

'I owe it all to chocolate and young men.'