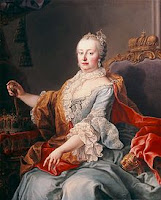 5, Jewish persons were expelled from Prague, then part of the Austro-Hungarian empire. The move was sanctioned by an edict that Holy Roman Empress Maria Theresa (right), "the only woman ruler in the 650[-year] history of the Habsburg dynasty," issued within days. It was an order that the Dutch ambassador to her court, acting on request of Jewish communities in Amsterdam, Rotterdam, and The Hague, had managed to postpone for several months. Envoys from other countries aided him but could not prevent the decree. After 2 years, however, "'on account of the pressure from the foreign ambassadors,'" the empress revoked the decree, and Jewish persons were permitted to return. (credit for 1759 portrait)