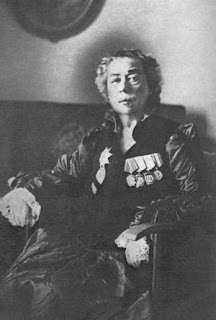 On this day in ...
... 1952 (60 years ago today) , the 1st woman to serve as an ambassador in the modern era died in Moscow, then the capital of the Soviet Union. She'd been born Alexandra Mikhailovna Domontovich 79 years earlier in St. Petersburg, capital of imperial Russia, to a mother of Finnish ancestry who'd divorced in order to marry Alexandra's father, an officer in the Russian military who held liberal political views. Educated and well traveled, the daughter married in 1893, in her early 20s. Alexandra Kollontai (left) began reading radical populist and Marxist tracts and writing fiction during her pregnancy. She became a revolutionary – 1st, a Menshevik, then, a Bolshevik – and in 1919, Europe's 1st woman government minister. That led to appointment in 1923 as the Soviet Ambassador to Norway, a 1st; later, she would be posted to Mexico, to Sweden, and to the delegation of the League of Nations. (photo credit) "Mme Kollontai," as The New York Times called her, was an advocate of sexual liberation and gender equality; controversy met publication of her book Red Love (1926). Kollontai's writings would inspire feminists in the late 20th century. According to another website, "She was the only major critic of the Soviet government that Joseph Stalin did not have executed."