(My thanks to IntLawGrrls for the opportunity to contribute this introductory post, another in the Read On! series)

Rape, and rape law, have been key sites of feminist struggle for decades. There is, therefore, no shortage of good books on rape and many excellent feminist analyses of rape law.
The springboard for our book on rape was a conference held at Durham University in 2008 which assessed the ten-year legacy of the Akayesu judgment issued on September 2, 1998, by Trial Chamber I of the International Criminal Tribunal for Rwanda. This judgment heralded the first conviction for genocide and war crimes based on rape, as well as an extended definition of what constitutes rape based on coercive circumstances. 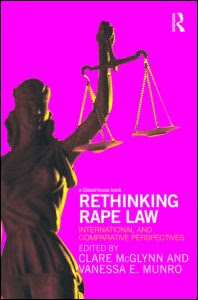 Reflecting on the significance of Akayesu is the consequent essay collection Rethinking Rape Law: International and Comparative Perspectives (2010) edited by Nottingham Law Professor Vanessa Munro and myself. It provides an occasion for engaging with broader debates about the role and relevance of law as a mechanism for securing change in the context of rape. The judgment also affords an opportunity to reappraise foundational assumptions about the nature of the wrong of rape and appropriate legal responses. The opportunity of this anniversary, therefore, was taken both in the conference and in our book, to assess legal definitions and strategies for counteracting rape across an extensive range of jurisdictions, including:
► International law,
► Regional human rights instruments, and
► The diversity of national legislation.
Rethinking Rape Law aims to provide a critical appraisal of recent developments in rape laws and to explore the parallels and dissonances between rape in times of war and in times of peace. It reflects on the differences between common law and continental jurisdictions, as well as between societies in transition and those which have been long inured to feminist activism.
Yet, not surprisingly, our book identifies many consistent challenges that plague rape laws, regardless of state borders or other boundaries.
It is hoped, therefore, that our book is challenging and innovative, not least in bringing together perspectives on international criminal law, human rights law and domestic criminal justice law and policy, alongside a theoretical interrogation of some of the foundational concepts in rape law.
The book also provides ‘stocktakes’ of the current responses and challenges to rape law in a number of national jurisdictions – from the more familiar, United States, Canada, Australia, and the United Kingdom, to Italy, Croatia, Sweden and South Africa.
Reviews of the book have thus far been positive.
Interestingly, though, one reviewer thinks the title of our book is not sufficiently clear to convey the ‘feminist goals and overall feminist approach’ of the book, which ‘might come as a surprise’ unless you are familiar with the work of the editors.
How depressing that it is a ‘surprise’ that a book on rape law contains feminist analysis; or indeed that any book on this subject should not engage with feminist thinking. Despite the wealth of writing on rape law and policy referred to above, it seems that, for some, feminism remains marginal.
The same reviewer also comments, in relation to discussions regarding expanding legal definitions of rape – rethinking rape law indeed – that feminism should ‘take the limits and principles of criminal law more seriously’.
It seems that it needs to be re-stated again (and again): if we are to see reform which secures both justice for rape victim-survivors and the autonomy of women, it is the criminal law which needs to take feminism more seriously.
by Clare McGlynn at 5:10 AM