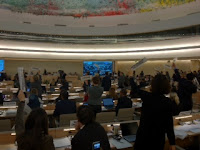 On Wednesday in Geneva, the UN Human Rights Council held its first ever panel discussion on human rights abuses against LGBT individuals around the world. “Discrimination and violence based on sexual orientation and gender identity,” the panel featured a video address from UN Secretary-General Ban Ki-moon, an opening statement by High Commissioner for Human Rights Navi Pillay introducing her report on the topic, and speakers from Brazil, Sweden, Pakistan, and the United States. It was chaired by Ambassador Abdul Minty of South Africa. Thirty-three States and a number of civil society organizations participated in the interactive dialogue that followed.
What the debate was actually about, however, was how to determine the meaning and content of international human rights.
From the beginning, most Islamic states and some African states had strenuously objected to the mere mention of the words “sexual orientation” and “gender identity” in the context of human rights. States of the Organization of Islamic Cooperation (OIC) staged a walkout at the beginning of the panel – something unprecedented in Human Rights Council history. In February, Pakistan, as coordinator of the (OIC), wrote a letter to the President of the Human Rights Council stating:

The international community only recognizes those rights enumerated in the Universal Declaration of Human Rights which were codified in subsequent international legal instruments. We note with concern the attempts to create controversial ‘new notions’ or ‘new standards’ by misinterpreting the Universal Declaration of Human Rights and international treaties to include such notions that were never articulated or agreed to by the UN membership. These attempts undermine not only the intent of the drafters and signatories to these human rights instruments, but also seriously jeopardize the entire international human rights framework.

What Pakistan’s letter, as well as its statement on behalf of the OIC at the panel debate, fail to acknowledge is that the drafters of the Universal Declaration of Human Rights deliberately crafted an open-ended list of prohibited grounds. Article 2 closes with the phrase “other status.” The same language is repeated in the International Covenant on Civil and Political Rights and the International Covenant on Economic, Social and Cultural Rights. The grounds are illustrative, not exhaustive. Treaty monitoring bodies, in their views on individual communications, concluding observations on state reports, and general comments, have recognized other grounds protected from arbitrary differences in treatment, including age, health status and disability. In General Comment No. 20, the Committee on Economic, Social and Cultural Rights explained:

The nature of discrimination varies according to context and evolves over time. A flexible approach to the ground of “other status” is thus needed in order to capture other forms of differential treatment that cannot be reasonably and objectively justified and are of a comparable nature to the expressly recognized grounds in article 2, paragraph 2. These additional grounds are commonly recognized when they reflect the experience of social groups that are vulnerable and have suffered and continue to suffer marginalization.

This solution was considered preferable over others, such as expressly including certain additional non-discrimination grounds (for example, physical or mental disability, sexual orientation or age), not because of a lack of awareness that such grounds have become particularly important in today’s societies as compared with the time of drafting of Article 14 of the Convention, but because such an inclusion was considered unnecessary from a legal point of view since the list of non-discrimination grounds is not exhaustive, and because inclusion of any particular additional ground might give rise to unwarranted a contrario interpretations as regards discrimination based on grounds not so included.

Similar processes with regards to sexual orientation have occurred in national courts. In 1995 the Supreme Court of Canada unanimously held that sexual orientation was analogous to the express grounds of prohibited discrimination and thus protected under Section 15 of the Canadian Charter of Rights and Freedoms. The High Court of Delhi followed similar reasoning in Naz Foundation, reading down Section 377 on both equality and privacy grounds.
Did the drafters of the UDHR, convening at the end of the Second World War, intend that sexual orientation and gender identity be included among the grounds protected from discrimination? Almost certainly not. Did they intend to write an open-ended and flexible list so that additional grounds could be recognized over time? Absolutely.
by Alli Jernow at 6:31 AM