(My thanks to IntLawGrrls for the opportunity to contribute this introductory post, part 1 of a 2-part series; part 2 is here) 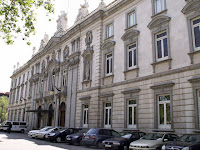 There has been much attention welcoming the Spanish Supreme Court’s dismissal of charges against Investigative Judge Baltasar Garzón for abuse of power for investigating crimes committed during Francisco Franco’s nearly forty-year dictatorship in Spain. However, little attention has been paid to the Court’s troubling discussion of Spain’s 1977 Amnesty Law, which prohibits criminal investigations into crimes committed during the dictatorship. (credit for photo of Supreme Court building in Madrid)
In a pyrrhic victory for Garzón and Franco regime victims, the Supreme Court upheld the amnesty as a beacon of peace, and thoroughly dismissed all arguments that Franco-era crimes could ever be investigated. This decision demonstrates that the infamous Francoism remains true: legally, at least, Spain is still atado y bien atado – all tied up and well tied up.
After Garzón decided to open an investigation into some 114,000 cases of forced disappearance allegedly committed during the Franco regime, far-right political groups charged Garzón for abuse of power. They argued that he had consciously overstepped his judicial power and breached the 1977 Amnesty Law, which provides that political crimes committed before 1976 cannot be prosecuted and is often invoked in dismissing investigation into Franco-era crimes.
The Supreme Court, in a 6 to 1 decision, dismissed the abuse of power charges, holding that while Garzón had “exceeded himself” in his interpretation of the law, he had not abused his power. (prior IntLawGrrls posts) Unfortunately, the Court then explained that such crimes could never be tried under Spanish law, by applying a very narrow interpretation of the principle of legality.
Spain suffered a devastating civil war from 1936 to 1939, resulting in an estimated 500,000 deaths. When a victorious Franco took power in 1939, he established a right-wing dictatorship and brutally repressed his opposition through forced disappearances, taking political prisoners and executions. Franco’s regime lasted until his death in 1975, at which time the political leadership from all parties decided that in order to maintain a shaky peace, past crimes should be forgotten.
The 1977 Amnesty Law was passed to ensure prosecutions would not take place. 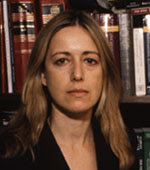 Transitional justice in Spain was characterized by agreements to leave the Franco-era abuses out of the public debate, forbid prosecutions for abuses and provide material reparations for victims. Essentially “letting bygones be bygones,” as New York Law School Professor Ruti G. Teitel (right) noted in her 2000 book Transitional Justice.

Paloma Aguilar (left), a political science professor at Madrid's UNED, the Universidad Nacional de Educación a Distancia, has argued that the transitional justice process centered on reconciliation over the Civil War, not the Franco dictatorship. (photo credit) She claims that these measures, while they allowed Spain to move forward rapidly in re-establishing a functioning democracy, ultimately benefited Francoists.
As opposed to other transitional justice situations, there was no attempt to establish truth or accountability for crimes committed under Franco’s regime—that is, until recently.

A contentious 2007 law declared Franco-era repression illegitimate, provided reparations for victims, mandated the removal of all Francoist symbols from public buildings, and required the government to assist in recovering the remains of the disappeared. However, it did not address criminal accountability.
Garzón characterized the Franco-era disappearances as crimes against humanity committed as part of a systematic attempt to eliminate political opponents. He considered the crimes as ongoing unlawful detentions—and therefore not subject to the prohibition of retroactive application of criminal law. As IntLawGrrl Naomi Roht-Arriaza has posted, this argument has been accepted by Spanish, foreign and international courts.
However, it didn’t work in this case.
The Supreme Court rejected all of these lines of argumentation, essentially barring any future charges of Franco-era crimes. The decision was rooted in a very narrow interpretation of the role of the courts and the principle of non-retroactivity of criminal laws.
Victims seeking to exercise their “right to know” originally initiated the case. Although the Court recognized that the search for the truth is legitimate and necessary, the Court considered it the job of other State organizations—not the judiciary. The decision went on to claim that even if the case were to be investigated by the judiciary, it would have to fail due to the principle of legality, the expiration of the statute of limitations and the 1977 Amnesty Law.
The Court concluded that international law relating to crimes against humanity is not applicable to the crimes in question due to the principle of legality. Customary international law does not have direct effects in Spanish law, and so cannot create laws that are not included in the Penal Code. Moreover, the principle of legality prohibits the retroactive application of customary international law or treaty law, the Court said.
The statute of limitations had also expired, the Court determined, since the case was brought 54 to 70 years after the crimes were allegedly committed. The Court was not persuaded by Garzón’s “continuing crime” argument, which it considered “unreasonable” and a “fiction contrary to judicial logic”.
The Court further declared that notwithstanding Spain’s ratification of treaties declaring that the statute of limitations does not apply for serious international crimes, these treaties could not be retroactively applied to the crimes in question here.
The Court also considered that international jurisprudence invalidating amnesties for international crimes does not apply in Spain. Even though it readily admitted that an amnesty could be considered as a restriction on the rights of victims to effective remedy for human rights violations, it was not in this case. This reasoning was also based on the principle of legality—Spain did not ratify the International Covenant on Civil and Political Rights until 1977, and the rights contained therein are not applicable retroactively.
Calls for repeal of the amnesty have been unsuccessful, and this narrow interpretation of principles of international law means that Franco’s victims will likely never have recourse to accountability for the crimes they suffered. Often heralded as a “successful” case study of transitional justice, it appears that some in Spain are not ready to face the truth of its painful and bloody past. As I will discuss in tomorrow's post, the Court’s praise of the amnesty shows that at least some in Spain are not ready to face its past.
by Jennifer Easterday at 5:00 AM