As end of gacaca nears, looking to more attention to post-genocide trauma from sexual violence

(Part 3 of our 3-part series on accountability in post-genocide Rwanda; Part 1 is here and Part 2 is here)

Although survivors whom we interviewed for the book we co-edited, The Men Who Killed Me: Rwandan Survivors of Sexual Violence (2009), were very sceptical about gacaca in the early years of its existence, today most feel that gacaca worked well and fulfilled its objectives by helping to expose the genocide, speeding up the caseload, holding perpetrators accountable and achieving reconciliation. Many commended the Rwandan government for having put this mechanism in place, saying there was no better initiative than gacaca.
Nevertheless, the survivors pointed out a number of gacaca’s flaws.
► They were disturbed by the absence of compensation: many did not receive any compensation for their losses during the genocide, in most cases because the perpetrators are poor. At the same time, some survivors said that, despite their poverty, they were not overly concerned with the issue of compensation because it could never bring their families back.
► Some survivors were dissatisfied with the judges, who they felt were not properly trained in the law, were biased and susceptible to bribery.
► Some felt the sentences handed to the perpetrators did not reflect the gravity of the crimes they had committed.
► Others mentioned the reluctance of the perpetrators to admit what they had done, to sincerely apologize for their crimes, and to tell the survivors where to find the remains of their family members (see further here and here).
Despite these concerns, the survivors were generally positive about gacaca – a view, they recognised, had drastically changed over time.

Does more need to be done for survivors of sexual violence?
Justice and reconciliation after the horrors of genocide may strike some as impossible, particularly in Rwanda where all Rwandans were involved, affected, and traumatized in one way or another. Post-genocide, survivors of sexual violence had to deal with many pressing needs (shelter, food, caring for their children), and for most, ensuring génocidaires were held accountable was not a priority.
When the government eventually instituted legal procedures against génocidaires, it became clear that justice and accountability in the form of gacaca, ordinary courts or even the International Criminal Tribunal for Rwanda in Arusha, Tanzania, were not within the reach of most victims of sexual violence. Many victims had died, many alleged génocidaires had died or escaped, and some survivors simply did not know the identity of those who had harmed them.
Moreover, the unprecedented decision to treat crimes of sexual violence as ‘category one’ crimes automatically meant life imprisonment.
As a survivor of sexual violence with firsthand experience in gacaca – both as a victim testifying against those who had raped her and as a judge presiding over cases of sexual violence – told us, the designation of sexual violence as a ‘category one’ crime, coupled with the shame of being labelled a rapist in Rwanda, likely had the counterproductive effect of deterring many perpetrators from confessing to these crimes. However, when we asked survivors whether there was any other initiative that could have provided them with a greater sense of justice and reconciliation than gacaca, they said no.
Obviously, there is not a singular road to justice and reconciliation in a country after genocide. While gacaca certainly made a contribution to this process, other initiatives must go hand in hand with it, such as Rwanda’s unity and reconciliation program.
The survivors featured in The Men Who Killed Me described, for example, other initiatives implemented by the government to support genocide survivors (e.g., the construction of houses by perpetrators for survivors, the provision of one cow per family and free HIV treatment – the latter two initiatives having been implemented for all poor people, not merely survivors), as well as the psychological support they receive from other survivors and the material, psychological and socio-economic support they receive through NGOs, such as Solace Ministries (the NGO of which all survivors in The Men Who Killed Me are beneficiaries of). These initiatives have enabled them to rebuild some aspects of their lives and it is our impression that the growth in their material status and their mental well-being also contributed to their increasingly positive evaluation of justice and reconciliation processes such as gacaca.
Correspondingly, having been able to share their experiences of the genocide in The Men Who Killed Me was very empowering.
They felt it enabled them to relieve their hearts, to have their experiences and their suffering during the genocide recognized, and to urge others to act to prevent these crimes from ever happening again. The proceeds and sponsorships that arose from the book also improved their quality of life. The survivors were proud to learn that their stories had been read all over the world and that their stories had taken on new creative forms, including as a theatre production based on their testimonials (in Halifax, Canada), as a component of a university course involving letter-writing (in Winnipeg, Canada), and as a Gregorian chant honouring female victims of violence (in Nijmegen, the Netherlands) (detailed at this website). They felt these were all important ways to provide a platform for the stories of survivors of sexual violence in Rwanda and other conflicts worldwide.
Many positive developments for women generally have been implemented in the years following the genocide, such as the right to own land and property and an inheritance law that mandates the equal division of a man’s property between his wife and children. Nevertheless, even 18 years after the genocide, more needs to be done for survivors of sexual violence.
Two survivors featured in The Men Who Killed Me passed away in 2010 from poor health, largely related to the trauma they experienced during the genocide. There needs to be better access to health care, counselling and other treatment for all survivors of sexual violence, including better access to a wider range of HIV treatment that addresses the individual needs of people living with HIV, nutritious food to maintain their health, counselling for mothers and children when the children are born from rape, and counselling and therapy for post-traumatic stress. Survivors’ underlying trauma necessitates their need for ongoing care, including home-based care. Women’s right to inherit family property should also be better enforced – a right that is often violated when women, particularly those living with HIV, are ejected with their children from their homes by their in-laws when their spouses pass away.
All children in Rwanda, especially orphans and other vulnerable children, also need greater support. This was a concern expressed by many survivors we spoke to, who are caring for their children and orphaned family members, not always able to afford those children’s education fees and materials, and usually receive no support for this additional burden.
Income-generating activities and stable housing are also crucial and continue to be inadequate for many survivors.
Moreover, the importance of symbolic gestures should not be under-estimated in ensuring crimes of sexual violence are not forgotten. 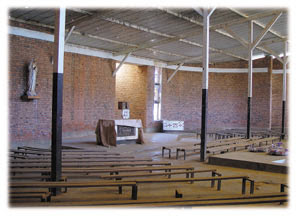 For example, a monument or museum could be erected in Rwanda where one could honour survivors of sexual violence permanently and regularly, in a location that is easily accessible to survivors. Although there are already some efforts to memorialize sexual violence during the Rwandan genocide, including at the Nyamata Memorial Site (left), where Annonciata Mukandoli, a victim of sexual violence, is buried, and at the Gisozi Memorial Centre (where descriptive banners are displayed) and the Ntarama Memorial Site (where a stick commonly used during the genocide to rape women is displayed), there are no sites specifically dedicated to victims of sexual violence. Existing memorial centres, history books and other mediums, such as movies and documentaries, should also memorialize the complexities and scale of sexual violence during the Rwandan genocide, as laid bare in The Men Who Killed Me.
Moreover, such initiatives should not be restricted to Rwanda’s borders.
Preventing crimes of sexual violence is a shared responsibility that begins by raising awareness of those crimes and their impact, addressing stigma and discrimination against its victims (which include both women and men) and studying the seeds of sexual violence and other crimes in conflict. Whatever remains to be done, however, it is clear that survivors of sexual violence should have meaningful input on what and how measures should be implemented.
by Anne-Marie de Brouwer + Sandra Ka Hon Chu at 1:00 PM