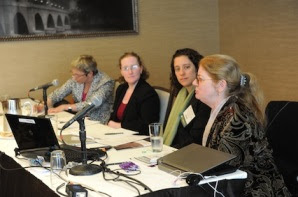 The expert roundtable participants were:
► Akiko Ito, UN Secretariat for the Convention on the Rights of Persons with Disabilities, United Nations Department of Economic and Social Affairs (presented by video recording);
► Caroline Bettinger-López (pictured second from right), University of Miami Law School and IntLawGrrls contributor;
► Julie Mertus (pictured at far left), School of International Service, American University;
► Rhonda Neuhaus (pictured second from left), Disability Rights Education and Defense Fund; and
► Stephanie Ortoleva (moderator), Women Enabled & School of International Service, American University.
Despite evidence of the widespread and pervasive nature of all forms of violence against women with disabilities, the issue remains largely invisible in mainstream standards and discourse on violence and discrimination.

Multiple Forms of Discrimination
The need to deepen and further implement a “multidimensionality” (or compound) approach to anti-discrimination and anti-violence in international, regional, and domestic law. Women with disabilities are at high risk of gender-based and other forms of violence based on social stereotypes and biases that attempt to dehumanize or infantilize them, exclude or isolate them, target them for sexual and other forms of violence, and put them at greater risk of institutionalized violence.
Further, women with disabilities who are also people of color or members of minority or indigenous peoples, can be subject to particularized forms of violence and discrimination, including denial of access to health care, forced sterilization, abuse in detention, and social isolation. Those responsible for interpreting and implementing international human rights treaties such as the 1989 Convention on All Forms of Discrimination against Women and the 2006 Convention on the Rights of Persons with Disabilities (CRPD), including states parties, must take full account of this principle. As U.S. anti-discrimination legal scholar Mari Matsuda might say, civil society advocates for any particular issues or group must continue to “ask the Other question.” Addressing complex issues involving violence against women with disabilities will require a simultaneous and multifaceted approach, not only to gender and disability, but also to race, sexual orientation, class, religion, and more.

Popular and Legal Education
There is a need for further popular, police, and judicial training that builds specific cultural awareness and legal knowledge about the rights of women with disabilities.Without such efforts, further elaboration of international, regional, and domestic legal standards may fail women with disabilities at grassroots levels.

Rights-based Approaches
States parties and civil society advocates must move beyond the old “charitable” and “medical”models of disability and embrace a social model of disability. Such a model focuses instead on harmful social perceptions and structures that advocates can help responsible actors to reconceive (e.g., in the practical context of “universal design”).

Lessons from the Inter-American System
Helpful lessons may be drawn from recent encouraging developments in the Inter-American Human Rights System such as Gonzalez (“Cotton Field”) v. Mexico (Inter-American Court) and (Jessica Lenahan) Gonzales v. United States (Inter-American Commission) decisions on state responsibility, due diligence, and violence against women. Similar analysis on prevention, access to justice, and compensation may be fruitful when addressing the other forms of violence women with disabilities experience as well.
The roundtable was an excellent opportunity to “center” these important issues and to engage lawyers on a range of substantive and strategic issues that can make a difference in the lives of millions of women.
Shortly after the Annual Meeting, the list of selected resources distributed at the roundtable will be posted on the IDRIG webpage.
(Heartfelt thanks to Deena Sharuk and to Nicholas Turner, who made the photograph above, for their assistance with this cable, which is cross-posted at ASIL Cables.)
by Hope Lewis at 6:00 AM

Discrimination affects women psychologically, intellectually, and socially. It leads to isolation, depression, and loss of self-esteem and motivation.