Gacaca courts in Rwanda: 18 years after the genocide, is there justice and reconciliation for survivors of sexual violence?

(Our thanks to IntLawGrrls for the opportunity to publish this introductory post, the 1st in our 3-part series, which begins on the 18th anniversary of the genocide in Rwanda)

In January 2012, several years after we first met the courageous women and man featured in the book we co-edited, The Men Who Killed Me: Rwandan Survivors of Sexual Violence (2009), we re-interviewed fifteen of those survivors of sexual violence to learn how their lives had unfolded since the book’s publication. The fascinating turns in their lives will be depicted in a new book we are presently working on, describing how they have come to deal with the trauma of sexual violence and other atrocities in Rwanda’s post-genocide society.
Some of the questions we asked the fifteen survivors in January pertained to the workings of the gacaca courts: How did they view these courts, and what was their personal experience before them?
All survivors had either participated in gacaca in order to learn more about the fate of their loved ones or the whereabouts of their stolen property, or had testified in gacaca against men who had raped them or individuals accused of having murdered their loved ones.
When we first interviewed the survivors in 2008, we observed a tendency towards scepticism about gacaca and its potential to achieve justice and reconciliation for themselves and for Rwandans more broadly. Over three years later, and with gacaca proceedings coming to an end on 18 June 2012, we sought to uncover whether this sentiment had changed. 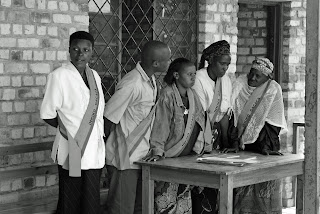